You are here: Home / Senza categoria / Key Hezbollah financier arrested in Brazil after years on the run 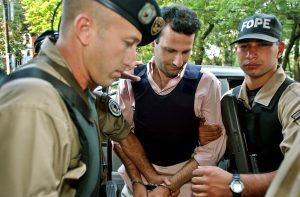 Brazilian police have announced the arrest of Assad Ahmad Barakat, a Lebanese national who is one of the most prolific international financiers for the Shiite group Hezbollah, like reported by intelnews.org.

Barakat was born in Lebanon but fled to Paraguay in the mid-1980s in the midst of Lebanon’s brutal civil war. He began an import-export business and eventually acquired Paraguayan citizenship. He gradually built a small business empire in Paraguay, which included engineering and construction, as well as transportation firms. Throughout that time, however, Barakat maintained strong connections with Hezbollah, the paramilitary group that has a strong following among Lebanon’s large Shiite Muslim community.

By the mid-1990s, Barakat was one of Hezbollah’s most active representatives in the Americas and operated as the Shiite group’s head of paramilitary and fundraising activities in South America. It is believed that he used his Paraguayan passport to travel to Iran and Lebanon for meetings with Hezbollah’s leadership at least once a year. In 2001, following pressure from the United States, Paraguay charged Barakat in absentia with money-laundering.

He was eventually caught in Brazil in 2002 and extradited to Paraguay, where he was tried and sentenced to six years in prison. Upon his release in 2008, Barakat returned to his role as Hezbollah’s fundraiser. Using fake passports, he traveled frequently to Brazil, Chile, Argentina, and other Latin American countries, despite having been described by the US government as “one of the most prominent and influential members of the [Hezbollah] terrorist organization”. He was wanted in Paraguay for identity theft and in Argentina for laundering in excess of $10 million in casinos in the north of the country.

Last Friday, the Brazilian Federal Police announced that Barakat had been arrested in the city of Foz do Iguaçu, which is adjacent to the Paraguayan and Argentinian borders. The city of 250,000 is the largest urban center of the so-called Tri-Border tropical region, known for its tropical climate, spectacular mountain views and casinos. Aside from being a year-round tourism center, the area is a known as a hotbed of money-laundering, forged currency smuggling and drug-trafficking activity. It is now known whether Barakat will face charges in Brazil or whether he will be extradited to Paraguay or Argentina.