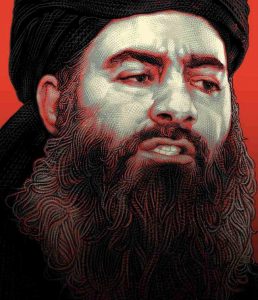 The arrest of five key members of the Islamic State (IS) points to a steady encroachment on territory still held by the extremist group and a tightening of the noose around its leader, Abu Bakr al-Baghdadi, like reported by al-monitor.com. Four members were reportedly captured near their home areas straddling the Syrian-Iraqi border. The two Syrians arrested had apparently not been involved with any of IS’ precursors, while at least one of the three Iraqis reportedly had a lengthy history with Jamaat al-Tawhid wal Jihad.

Questions remain regarding exactly how and when the men were detained, with media reports and official statements providing conflicting accounts. Their capture alive is nevertheless a boon for intelligence agencies, as cross-border airstrikes have been stepped up on the few areas still under IS control in Syria’s eastern Deir ez-Zor province. The area is roughly divided by the Euphrates River into international coalition-backed Syrian Democratic Forces (SDF) territory north and east of the waterway and Syrian regime and allied militias south and west of it, with the most sizable IS enclaves in SDF-held areas.

On May 9, Iraqi television broadcast a video that opened with the seal of the Iraqi National Intelligence Service and went on to showcase the men’s capture. Reminiscent of suspense-provoking film trailers in a style similar to that long used by IS itself to attract viewers and acolytes, the video includes footage of the five men during their time in IS followed by post-capture monologues, with the captives dressed in bright yellow prisoner uniforms.

The video ends with a photograph of Prime Minister Haidar al-Abadi, noting that he had closely overseen the operation. The video’s release only a few days prior to the May 12 parliamentary elections hinted at an attempt to boost Abadi’s share of the vote.

A statement posted May 11 by the Iraqi Security Media Center on a WhatsApp group with government officials and journalists working in Iraq said that all five men had been arrested on Syrian territory. At least one of them, however, the Iraqi Ismail Alwan Salman al-Ithawi, aka Abu Zaid al-Iraqi, had actually been arrested in February in Turkey. Iraqi intelligence allegedly lured the other four into a trap using Ithawi, according to the New York Times. The Times report included inaccuracies, however, claiming that four Iraqis and one Syrian had been captured in the cross-border operation instead of three Iraqis and two Syrians.

That the men were arrested by Iraqi intelligence — despite reportedly having been captured in SDF territory prior to being brought to Iraq, although some media reports claim they were lured into Iraq — and not by the SDF, which is proving to be much more lenient, means that they will presumably face the death penalty unless some sort of deal is reached on their cooperation.

Al-Monitor had been told a few months prior by a source from Deir ez-Zor that one of the men, Mohammad al-Qadeer, had been arrested by the SDF while trying to escape IS-held Hejin. The source had at that time expressed concern that the SDF might release him in exchange for a large bribe, claiming that this often occurred in the area.

The two Syrians, Saddam al-Jamal and Qadeer, more widely known as Abu Seif al-Shaiti, are from Deir ez-Zor. Jamal is from al-Bukamal, just opposite Iraq’s al-Qaim, where his family is said to have sought refuge for a period. Abu Seif hails from Gharanij, one of the three main towns of the Shaitat tribe’s ancestral land. Both had been with Syrian opposition groups in their area prior to switching sides.

In the Iraqi video, Jamal is the first of the men to appear. According to author and Deir ez-Zor native Hassan Hassan, he is the “highest profile captured alive, after Abu Zaid al-Iraqi.” Jamal had been involved in cross-border smuggling and other illicit activities prior to the Syrian conflict, sources from the region told Al-Monitor. His deputy in the Allahu Akhbar Brigade, which Jamal led, later went on to form a Turkey-based media activists group focusing on getting information out of IS-held eastern Syria.

As this journalist reported in 2015 in Al-Monitor, a “media activists’ group from eastern Syria that requested anonymity due to security reasons includes a man who used to fight with a Free Syrian Army group led by Saddam al-Jamal, who later joined IS. … Members of the group said that it had about 70 people inside Syria that pass on information.”

Al-Monitor has long been told by people close to Jamal that he allegedly joined IS to extract revenge against Jabhat al-Nusra, which opposed IS in their region at the time, after his brothers were killed by the group. Recent media reports have corroborated the account.

This reporter had met Abu Seif in 2012 when interviewing various opposition groups from the restive Deir ez-Zor region. At the time, he was lean, had a trimmed beard and a tattoo on his arm and wore a loose-fitting turtleneck. He kept company with two other men involved in opposition groups from the same area and a Russian prostitute in a rooftop hotel cafe. Less than two years later, he would allegedly become one of the main culprits behind a massacre of his own tribe, the Shaitat, at the hands of IS.

As this journalist reported for Al-Monitor in 2015 on the one-year anniversary of the massacre, “little international coverage was given to the mass killing of his fellow tribesmen at the hands of the Islamic State a year ago, in which as many as a thousand were slaughtered following an insurrection.

“A US Delta Force raid that killed Abu Sayyaf — a senior figure in IS’s illicit oil and gas activities, key financier and Tunisian national — in mid-May 2015 in eastern Syria briefly spotlighted the area near the valuable al-Omar oil fields, but little attention has been given to the tribes therein. … Between 800 and 1,000 mostly men are thought to have been killed in early August 2014 in retaliation for an anti-IS uprising. The revolt was conducted mainly by civilians after various rebel groups, including local Jabhat al-Nusra fighters, had withdrawn the month before.”

In the video, Abu Seif is obese and seems slow-witted, reeling off names of the various groups he took part in prior to joining IS.

As for Omar al-Karbouly, “[He worked] closely with Abu Moussa al-Zarqawi as a top-level leader starting in 2003,” Col. Moussa al-Karbouly, who now leads a local Popular Mobilization Unit (PMU) in al-Qaim, told Al-Monitor. The PMU officer recounted having in 2008 arrested the man now in the hands of the Iraqi intelligence services.

He said he had spotted Omar in a market in Fallujah and “grabbed him and put a gun to his head, handing him over to the police there. But he bribed them to get out and then bombed my home.” Col. Karbouly had previously worked in police intelligence in al-Qaim, the border town native to both him and Omar.

The Iraqi Essam al-Zawbai was also among the captured. It is widely assumed that the men will be used to track down IS’ top leader — the Iraqi-born Ibrahim Awwad Ibrahim Ali al-Badri al-Samarrai, aka Abu Bakr al-Baghdadi.