You are here: Home / MidEastGulf / Kerry says Assad can stay in power 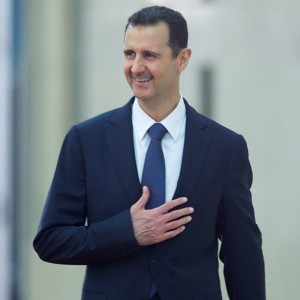 US Secretary of State, John Kerry, told journalists that “the United States and our partners are not seeking so-called regime change” in Syria.

The US changed her mind regarding the fate of Syrian President Bashar al-Assad as the Secretary of State, John Kerry, told reporters in Moscow, Russia that the US and her partners “are not seeking so-called regime change” in Syria.

After meeting with Russian Foreign Minister, Sergei Lavrov, Kerry told reporters that the focus for the two rival countries, is “not on our differences about what can or cannot be done immediately about Assad.” Rather, it is on facilitating a peace process in which “Syrians will be making decisions for the future of Syria,” the US official said.

Kerry’s words show that the US partially gave in to the Russian demand that the Syrian people must decide about the future of the Syrian President. Kerry added though, that “no one should be forced to choose between a dictator and being plagued by terrorists.” However, he described the Syrian opposition’s demand that Assad must leave as soon as peace talks begin as a “nonstarting position, obviously.”

Kerry and Lavrov also confirmed their previous agreements to work together to fight Daesh presence in Syria. Lavrov told journalists: “We confirmed the agreements reached by the Russian and US militaries, including the agreements that also apply to the US-led coalition working against Daesh, and in practical terms agreed on some further steps which will help make our parallel work more coordinated and effective.”

“We see Syria fundamentally very similarly, we want the same outcomes, we see the same dangers, we understand the same challenges,” Kerry added. He also said that the US and Russia have been “honest with differences,” but in general agree that the Syrian war “requires political process.”

“Russia and the United States agree that you can’t defeat Daesh without also deescalating the fight in Syria,” the Secretary of State said, adding that both Moscow and Washington are “focused on political process.”

Kerry also said that Moscow and Washington have found “common ground” on which opposition groups should participate in the Syrian peace talks.