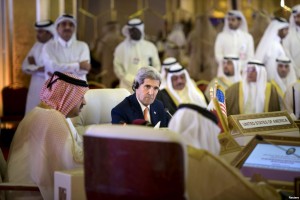 US Secretary of State John Kerry began talks with Gulf states in Qatar on Monday, seeking to convince them of the merits of last month’s nuclear deal with Iran and to discuss the battle against Islamic State militants and the war in Syria.

Most Gulf Arab states are worried that Iran’s July 14 accord with the United States and other powers will hasten detente between Teheran and Washington and embolden Iran to support paramilitary allies in the region.

Last month, world powers agreed to lift sanctions on Iran in return for curbs on a nuclear program the West suspects was aimed at creating an atomic bomb, but which Teheran says was peaceful.

Speaking in Egypt on Sunday, Kerry said the US had labeled Iran the world’s number-one state sponsor of terror, but this was precisely why it was so important to ensure Teheran did not obtain a nuclear weapon.

“There can be absolutely no question that if the Vienna plan is fully implemented, it will make Egypt and all the countries of this region safer than they otherwise would be or were,” he said, adding that he would discuss ways to ensure the future security of the region in Doha.

He will also hold a meeting with his Russian counterpart Sergei Lavrov and Saudi Arabia’s Foreign Minister Adel al-Jubeir, which US officials say will focus on the war in Syria.

Russia has been trying to bring about rapprochement between the Syrian government and regional states including Saudi Arabia and Turkey, to forge an alliance to fight Islamic State.

Kerry said last month that with Lavrov he planned to discuss combating Islamic State militants and the role Iran could play.

US officials say Kerry’s diplomatic outreach in Doha is a follow-up to a summit President Barack Obama had at Camp David in May with Gulf Arab leaders, which was snubbed by the leaders of Bahrain and Saudi Arabia.

At that meeting, Obama responded to concerns among Gulf states about the Iran nuclear deal by vowing to back them against any “external attack” and pledging that the United States would consider using military force to defend them.