You are here: Home / MidEastGulf / Kerry: for final deal, Iran must reveal past nuclear military activity 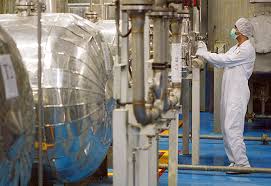 US Secretary of State John Kerry said that a final nuclear accord with Iran will demand Tehran disclose its past military-related nuclear activities, according to ToI.com.

As a part of its review of Iran’s nuclear program, the International Atomic Energy Agency has been looking into whether the Islamic Republic has attempted build atomic weapons in the past. Although Tehran denies any military ambitions — past and present — the IAEA and several other countries believe it may have secretly worked to develop nuclear arms.

Iran has repeatedly stonewalled the United Nations’ nuclear monitoring agency from fully investigating the scope of the country’s nuclear ambitions. However, according to Kerry, that will change under the terms of any June agreement, which would include “a very robust inspection system.”

Also Wednesday, the Iranian defense minister made clear that international inspectors would not be granted access to the state’s military sites under the framework agreement with the world powers on the country’s nuclear program.

During the interview, Kerry also discussed the mounting US domestic opposition the nuclear talks face. He said Congress had a role in moving the framework agreement forward provided it was “constructive.”

He cautioned that the proposed legislation in Congress that would temporarily suspend US President Barack Obama’s authority to lift sanctions as part of final deal, undermined the president’s authority.

“The president is absolutely correct in making sure that what Congress does, does not assault presidential authority and the Constitution, and doesn’t destroy his ability to be able to negotiate this final deal,” he said.

Referencing recent reports of Iranian ships in the Gulf of Aden, Kerry warned Tehran over its involvement in nearby Yemen, saying that the US would not tolerate Iranian military aggression.

“Iran needs to recognize that the United States is not going to stand by while the region is destabilized or while people engage in overt warfare across lines — international boundaries — in other countries,”

The secretary of state said that Washington was “well aware” of the support Iran has been giving to the Houthi rebels who drove Yemeni President Abdrabbuh Mansour Hadi out of the country.

Fighting between Houthi rebels and forces loyal to the ousted president southern Yemeni city of Aden have intensified in recent weeks as a Saudi-led coalition backed by the US has been targeting rebel positions in Yemen since the end of March.

The US secretary also maintained that dealing with the regional unrest fueled by Iran must be separated from international efforts to scale back its nuclear program. Israel has insisted that any nuclear deal with the Islamic Republic hinge on commitments to end its involvement in sponsoring Hezbollah, Hamas, and Houthi rebels.

Kerry said “we’ve made clear to our friends and allies is, we can do two things at the same time.”

“We have an ability to understand that an Iran with a nuclear weapon is a greater threat than an Iran without one, and at the same time, we have an ability to be able to stand up to interference that is inappropriate or against international law, or contrary to the region’s stability and interest, and those of our friends. And we’re not looking for confrontation, obviously, but we’re not going to step away from our alliances, and our friendships, and the need to stand with those who feel threatened as the consequence of the choices that Iran might be making.”

The framework agreement reached last Thursday by US-led negotiators with Iran aims to cut significantly into Tehran’s bomb-making technology while giving the Shiite country relief from international sanctions. The commitments, if implemented, would substantially pare down Iranian nuclear assets for a decade and restrict others for an additional five years. Iran would also be subject to intrusive international inspections. The world powers have until June 30 to hammer out a final accord.

Read more: Kerry: For final deal, Iran must reveal past nuclear military activity | The Times of Israel http://www.timesofisrael.com/kerry-for-final-deal-iran-must-reveal-past-nuclear-military-activity/#ixzz3WnGKGr5s
Follow us: @timesofisrael on Twitter | timesofisrael on Facebook