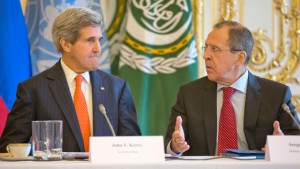 The Russian Minister of Foreign Affairs, Serguei Lavrov, spoke in Kuala Lumpur with the US Secretary of State, John Kerry, on the situation in the Levant, the conflict in Syria and the fight against terrorism, said today the capital television.

Lavrov, who met separately representatives of Pyongyang, Seoul, Malaysia and China at the meeting of the Association of Southeast Asian Nations, noted the disagreement between Moscow and Washington on issues linked to the Syrian dispute.

The head of Russian diplomacy lashed yesterday the attempts of the United States to justify a direct armed intervention in the Syrian conflict, under the pretext of combating terrorism and supporting the moderate position which is fighting against the Government of Bashar Al-Assad.

However, Lavrov stressed, both sides agreed that the peaceful way is the only way or final solution to end the bloodshed in the Levantine State, with more 100,000 people dead.