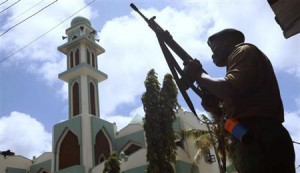 A Kenyan court on Thursday sentenced an Islamic cleric to 20 years in prison for radicalization of minors to join Al-Shabaab terror group in the coastal city of Mombasa.

Mochache said Wabwire, a former student at Maseno University, misused his leadership position as Imam and engaged in anti-terror activities of radicalizing the school-going children in the coastal town of Kilifi between the year 2014 and 2015.

“The court strongly believes the accused took advantage of the poverty rate in the region by offering the children some food, thereby using it as a bet to trap them,” the magistrate ruled.

“He has already sold his soul to the devil and was in the process of selling the souls of other children. It is in my view that the accused person need to be kept away from the public for a long time,” Mochache said.

The magistrate ruled that the prosecution was able to convince the court that the pupils were radicalized by the Imam.

While making his ruling, Mochache stated that the pupils who testified in the case indicated clearly that they were secretly radicalized to jihad teaching in a Madrasah where they attended religious studies.

The magistrate said the accused labeled the children’s shirts with the term radical. The court however acquitted the accused of charge of being a member of Al-Shabaab.

Wabwire who was studying Bachelor of Arts and Political Science at Maseno University before being expelled after he stabbed a fellow student in 2012.

The court noted that the accused misused the peaceful Islam religion to propagate religious hatred.

“I believe the children who testified told the court the truth, because each child’s evidence was unique and distinct. Prosecution has proofed that he radicalized the pupil and I accordingly convict the accused,” said Mochache.

The government has intensified the war on terror with successful arrest of two wanted terror suspects and found cache of weapons in anti-terrorist operation in Malindi and Mombasa.

Police are looking for three other suspects, Kassim Abdhalla, Hussein Said aka Babli and Ismael Shosi, who are still on the run.

Mombasa county commissioner Nelson Marwa warned that the war on terror has just started and the past three years were just a “warm up”.

Last month, Wabwire who had denied the charges said he was just a victim of circumstances who had been framed by the committee members of the school who wanted him out of the school.

He denied being a member of the Al-Shabaab terror group and that he never taught any student radical issues.