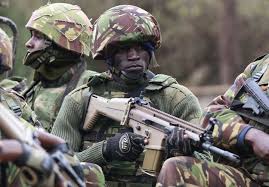 Since the start of the Somalia war, there are at least two unique and intriguing cases in the capture of dozens of towns in southern Somalia.

These two victories can be the pride of any military in the world.

The most publicised is the victory at the port city of Kismayu in September 2012 codenamed Operation Sledge Hammer.

This was achieved through a seaborne (amphibious) landing, the first such operation by an African military.

During Operation Sledge Hammer, troops in three battle groups and a team of special forces, who were critical in spearheading the vanguard unit to secure the landing zone, captured the port city without much fanfare.

Actually by the time they arrived in Kismayu, Al-Shabaab militants had run away, leaving only pockets of resistance that were overrun.

The second intriguing capture of a town in the five-year war is that of Badhadhe, a small town in the Gedo region of southern Somalia full of Al-Shabaab militants that KDF retreated from after the El Adde attack.

Perhaps the reason not much has been heard about it is because it was captured by special forces.

The men who captured Badhadhe were drawn from KDF’s Special Operations Regiment (SOR), which includes troops from a variety of Kenya’s best units, whose numbers have grown since 2011.

While most of their operations remain classified, SOR operators have been used more aggressively in the past five years than ever before.

“Our revolution started with Somalia,” a commanding officer in one of the elite units, who spoke in confidence, told the Sunday Nation.

The elite soldiers train to track a target, and finish him off without being detected.

They are highly trained, well equipped, and experts in weapons, intelligence gathering and battlefield medicine.

Before the start of the Somali war, the battle-hardened Kenya Army’s 20th Para which ran to the rescue of besieged KDF troops during the El Adde attack in January, was the only known unit of Kenya’s elite forces.

Today, others that make up SOR are the 20th Para, the 40 Rangers Strike Force and the 30 Special Forces.

Since October 16, 2011, the day that Kenyan soldiers crossed over the border to Somalia, the elite forces have grown in every conceivable way — from funding and personnel to deployment.

Mr Eddie Njoroge, a graduate of War Studies from Kings College in the UK, says increased use of special forces is necessary because traditional approaches to deterrence have become inadequate.

“The special operators are trained to implement unorthodox alternatives in missions, especially in a war where it is extremely frustrating to differentiate a civilian from a combatant,” he says.

According to sources within the Special Operations Regiment, the elite forces were initially deployed alongside almost every battalion.

But in later years they have been sent for specific missions in Somalia.

For instance, on the morning of May 29, 2015, elite forces conducted a two-pronged assault on Bula Hawo district.

The special forces’ increasing robust presence even with Kenya’s borders has been propelled by a sharp spike in demand for unique expertise in unconventional warfare and counterterrorism.

Today, most special forces are able to reach most Kenyan towns, cities and even villages.

They are the protectors of Nairobi, the forest dwellers of Boni in Lamu County and the pastoralists of northern Kenya.

They are tasked to identify risks and provide advice to government officials in the field to buttress local security capabilities and reduce the likelihood of full military interventions.

The elite forces have also been tasked with beefing up the security of the president and other foreign dignitaries when they visit the country, including when American President Barack Obama came to Nairobi last year.

Despite their increased presence in the country, the elites still prefer to work under the radar.

Another unit is the Long Range Surveillance (LRS) team that is highly secretive.

Its men and women carry out difficult and secret military missions, including gathering information behind enemy lines.

The KDF personnel from the elite forces pride themselves as among the best trained and equipped on the continent.

During a recent joint training with Jordan’s Quick Reaction Force, a military source said the Jordanians were taken aback by the Kenyans’ superior skills.

Most of the specialised teams are trained by the Americans, Britons and Belgians.

Before the US Congress and UK Parliament put pressure on their governments to state how much their countries were investing and equipping the Kenyan elite forces, the information was kept away from the public.

But in a past interview, Col Holsteyns Herwig of the US Embassy of Nairobi, denied his country’s involvement with Kenya’s elite LRS.

“We are not involved in the training of a new elite unit in Kenya and there is no cooperation in this field.”

But according to multiple Western sources, who spoke to the Sunday Nation in confidence for this special report, US special operations forces have played a crucial role in infrastructure investments for the Kenyan special operations teams.

The military support has also included the establishment of a Ranger School.