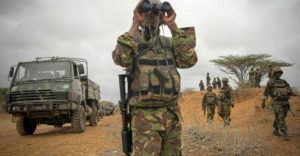 Leaders of Kenya’s northeastern counties met this week and vowed to fight against al-Shabab, the Somalia-based militant group that has terrorized the region since 2011, like reported by voanews.com.

One troubling question hung over the meeting: How can that be done effectively?

The five counties represented at the two-day meeting — Mandera, Garissa, Isiolo, Wajir and Marsabit — all have seen their share of deadly al-Shabab attacks. The worst one took place in April 2015, when militant gunmen stormed Garissa University College and killed 148 people, most of them students.

Ali Korane, the governor of Garissa County, said northeast Kenya is hugely suffering as a result of such terror attacks.

“Today our schools are not functional, our roads are impassable, doctors have abandoned hospitals, and carrying out development projects is impossible, and all these are the results of the regional insecurity posed by the terrorists,” Korane said. “We have to pull out all the stops to prevent” further attacks.

One call for withdrawal

The meeting in Mandera city was the first to bring together politicians, elders, villagers and officials from Kenyan security agencies to discuss insecurity and al-Shabab attacks in northeastern Kenya.

“Everyone knows where we were security-wise before Kenyan troops crossed the border into Somalia in 2011 and where we are now,” Arai said. “If we are people of Mandera, we have no interest in KDF presence in Somalia. They should withdraw, come along our border and protect us.”

One idea was to require residents to compensate the families of non-local victims of al-Shabab. The militants tend to attack schools, the army and police, whose employees are often not from northeastern Kenya. If locals knew they’d have to pay the families of terrorism victims, they might be more willing to cooperate with police, according to proponents of this idea.

“People are not providing information and the much-needed goodwill. Let us do all we can to face the threat that does not only affect the region but also the future of our families,” Mohamed said.

At the end of the meeting, the leaders agreed to “aggressively sensitize” the public to the danger of violent extremism; request that the central government give amnesty to young men who joined the militants; and demand that security agencies have a quick-response plan when an attack takes place. In the past, local leaders have accused the central government of reacting slowly to terrorist attacks.