You are here: Home / Africa / Kenyan troops will stay in Somalia to fight islamist Shabaab 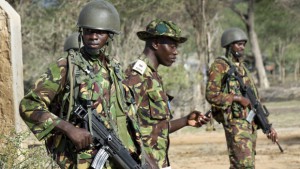 Kenya’s President Uhuru Kenyatta vowed on Wednesday to keep troops in Somalia to fight Al Shabaab militants, apparently dismissing suggestions the country may be drawing up an exit strategy in order to focus on attacks on its own soil.

Kenyan troops crossed into Somalia in 2011 to fight the Al Qaeda-affiliated insurgents, and later joined the African Union force, AMISOM, which is supporting Somalia’s internationally-backed government.

The Shabaab have since stepped up their operations in Kenya, dealing a blow to plans for the troops to serve as a buffer and protect the long, porous border.

Kenyatta, who met other leaders contributing troops to AMISOM — including Burundi, Djibouti, Ethiopia and Uganda — at an AU summit in South Africa last week, said Kenya’s role was clear.

He insisted Kenya “will continue with the mission to support the stabilisation of the Horn of Africa country,” a statement from the presidency said.

“We are a nation that appreciates and recognises the rights of every individual and their freedom of worship. We will not allow any person to force on us a way of life that is not ours,” he was quoted as saying during a visit to soldiers wounded in a recent attack.

The chairman of the Kenyan Senate’s National Security and Foreign Relations Committee, Yusuf Hajji, signalled earlier this month that an exit strategy was no longer taboo and that Kenya wanted to create “a strategy on how to fight insecurity in Kenya.”

The comments prompted widespread speculation about whether Kenya could be laying the ground for a pull-out.

Kenyan defence chief, General Samson Mwathethe, said the military would spare no efforts to drive the militants out of the country.

Shabab units — hunted by African Union troops and US drones inside Somalia — have outflanked the Kenyan contingent inside Somalia to mount a string of gruesome cross-border raids.  The upsurge in attacks and the emergence of Kenya-based Shabab cells is now Kenya’s number-one security headache.