You are here: Home / Africa / Kenyan soldiers and US drones inflict heavy losses in attacks against Shabaab 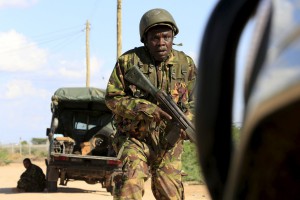 Fifty-three Al-Shabaab terrorists, among them 10 top commanders, were on Thursday killed in two separate dawn attacks on one of the terrorist group’s planning and operation bases in Somalia.

The first attack by a US drone took place in Juungal, between Baardheere and Buur Hajje, at around 2am where two top commanders identified as Jama Deere and Ismael Jamhad were killed.

An hour later, the Amisom forces launched an artillery attack in Jungal, about 40km west of Bardhere in the Gedo Region, where 51 terrorists, including several middle-level commanders behind the Mandera attacks were killed.

Military spokesman Colonel David Obonyo said that a total of 11 pickup trucks mounted with machine guns were destroyed and an unknown number of terrorists escaped with injuries to Bardheere.

“Jungal was one of the main Al-Shabaab planning and operations bases in (the) Gedo region which has seen an increase in militia activities recently. The strike at Jungal is therefore a major setback to the terrorists,” said Colonel Obonyo.

The killing of Mr Deere and Jamhad in the US drone attack is part of an intensified campaign by the United States against terrorists in Kenya and Somalia.

Residents said that several loud blasts were heard at dawn before the bodies were later found. The bodies were collected Thursday for a further forensic identification. Though the terrorists have been driven from most of the key towns they once held, Bardere is one of the few towns still controlled by Al-Shabaab.

After the blasts, heavily armed Al-Shabaab fighters rushed to the scene, near the Juba River, about 460km west of Mogadishu, where the dead men were found. After the attack, the telecommunications network was cut off for hours.

There has been a major and unprecedented involvement of the US security agents in the fight against terrorism in the region, prompted by President Obama’s visit to Kenya in the next week.

Already, at least eleven terror suspects, two from the Dadaab refugee camp, have been arrested but details about their whereabouts remain scanty.

As a result, US counter-terrorism officers enhanced their operations in the East African region, focusing more on Somalia. The enhanced operation has also led to the killing of Mr Adan Garar, an Al-Shabaab leader linked to the 2013 Westgate attack, in a drone attack in Diinsoor, southern Somalia, on March 12.

A day earlier, seven other Al-Shabaab terrorists were also killed in a battle with Kenyan soldiers in Lagolie, a small township near Elade, also in the Gedo region. A KDF soldier died while another sustained injuries during the fight at 9.30am on Wednesday.

“Amisom operations will continue to engage the militia and ensure that its mandate to stabilize Somalia is fully achieved. The entry of KDF in Gedo is part of efforts to prevent infiltration of the terrorists into Kenya through the common border and safeguard the peace and security of Kenya,” he added.