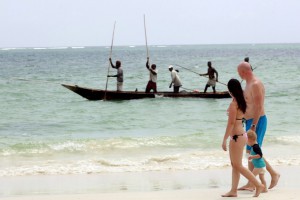 Kenyan police killed four suspected Islamists in the coastal resort of Malindi on Wednesday after receiving a tip-off that the men were planning to attack a local shopping mall and a police post, the local police chief said.

In the past, such attacks in Kenya have been carried out by al Shabaab, a Somali militant group which wants to punish Kenya for sending its troops into Somalia as part of an African Union peacekeeping force.

Mutava Muchangi, the local police chief, said four men were killed when police raided a residence in Malindi, 120 km (75 miles) north of the port Mombasa, following a tip-off by members of the public.

“The suspects started firing at our officers when they were challenged to surrender, and so we shot and killed them,” Muchangi told Reuters. The men had also thrown a grenade at police officers but none was injured.

Muchangi said police had recovered a pistol and five grenades. The men had fled from Mombasa during a police crackdown on suspected Islamists with ties to Somali militants, he said.

Al Shabaab, which is aligned to al Qaeda, killed 67 people during an attack on the luxury Westgate shopping mall in Nairobi in September 2013. Last April, al Shabaab gunmen killed about 150 people when they stormed Kenya’s Garissa University.

The group staged a major attack on a Kenyan base in Somalia last week, claiming to have killed more than 100 Kenyan soldiers. Kenyan officials have not disclosed the death toll, but newspaper pictures of coffins bringing back dead Kenyan soldiers from Somalia has ratcheted up pressure on President Uhuru Kenyatta.

On Wednesday, al Shabaab published scores of photos purporting to show showing bullet-riddled bodies of Kenyan soldiers killed during Friday’s attack, along with looted army equipment. The group says it is holding some Kenyan soldiers captive.

Kenyatta on Tuesday said the Kenyan military was conducting search and rescue operations for troops in the wake of the attack on the Ceel Cadde base, close to the Kenyan border, but did not confirm if any soldiers were being held by militants.

“Their actions have only made us stronger and emboldened us in our determination to defeat them,” Kenyatta said in televised address to the nation.