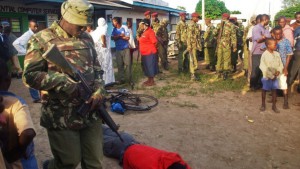 Northeastern Regional Coordinator Mohamud Saleh said Sunday the killed were Al-Shabaab militants who had planned to attack police targets in the town, which is situated on the border with Somalia in Mandera county.

“On Saturday afternoon, the police officers acting on intelligence pursued five or so Al-Shabaab militants who had been sighted,” Saleh said.

Saleh said police officers tracked the militants and then engaged a group of 20, who were carrying machine guns and rocket-propelled grenade launchers, in an exchange of fire.

Kenya has enhanced security in border towns following several attacks blamed on Al-Shabaab in the past months.

Al-Shabaab militants have carried out a series of bloody attacks in Kenya since Kenyan troops entered Somalia to battle the group in 2011, as part of the African Union peacekeeping force.