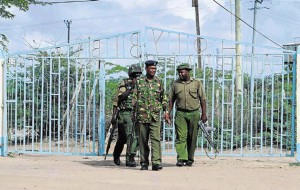 The British male, who works for a well-known advertising agency, was arrested in a raid on his home in the upmarket Nairobi suburb of Gigiri, which is popular with expatriates.

“We have three suspects in custody and one of them is British. We are still interrogating them with a view to taking them to court tomorrow,” one police source said. “They are being investigated for radicalisation.”

Another source said the three were suspected of “recruiting Kenyan youths to join Al Shabaab.”

“They are strong indications that they have travelled to and from Somalia on several occasions and the investigations will be centred on that aspect,” he added.

The raid was carried out in the presence of the director of Kenya’s Criminal Investigations Department Ndegwa Muhoro, sources said.

The Al-Qaeda backed Shabaab has fought to overthrow the internationally-backed government in Mogadishu since 2007, but turned its sights on Kenya when the army was sent into Somalia in 2011 to fight the Islamic insurgents.

In November 2014 gunmen flagged down a commuter bus, separated passengers by religion and executed 28 non-Muslims.

Since then the militants have targeted civilians in different parts of Kenya, including a dramatic assault on Nairobi’s Westgate shopping mall in which at least 67 people were killed and the murder of 148 people at Garissa University in the northeast in 2015.