You are here: Home / Africa / Kenya vows not to withdraw troops from Somalia 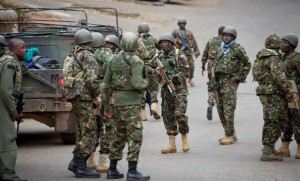 The Kenyan government maintained it will not withdraw its troops from Somalia as being demanded by Somali militants, according to AP.

Deputy President William Ruto said the Kenya Defense Forces (KDF) instead urged Kenyans to be united in the fight against global terrorism.

“Terrorists are telling us to withdraw our soldiers in Somalia so that they can take part of our country. What are leaders showing when they join hands with the terrorists in calling for the withdrawal of our forces in Somalia?” Ruto said in Kakamega, Western Kenya.

“We are not going to allow even an inch of our land to be taken by terrorists,” the deputy president warned.

Ruto asked Kenyans to discourage the culture of blame game on matters of security and called for concerted efforts in the war against terrorism.

He said issues of security required the support and participation of all Kenyans if the war against terrorism has to be won, saying it was not time for blame game.

“It is our collective responsibility as Kenyan to participate in the war against insecurity. Let’s stop blame game and work together in addressing security challenges facing the country,” Ruto said.

“It is upon all of us to participate in fighting insecurity in any part of the country instead of engaging in blame game,” he added.

“We are going to use every resource and equipment to ensure security for all Kenyans,” Ruto said.

He added that the government has moved with speed to ensure police officers are provided with vehicles among other equipment crucial in the fight against insecurity.

He said there is shortage of 30,000 police officers, noting that the government plans to recruit more officers to help in the war against insecurity in the country.

“We recruited last year 7,000 police officers and planned to recruit another 3,000 officers this year but some individuals who are comfortable in their Nairobi offices went to court to block the recruitment,” Ruto said.

He said the government would employ 10,000 officers on April 20 so as to report for training within the shortest time possible.