You are here: Home / Africa / Kenya, Uganda step up security: “Threat of terrorism is real” 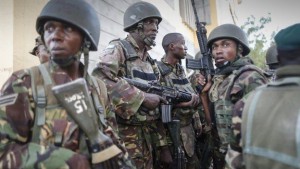 Kenyan and Ugandan security forces have stepped up patrols in the wake of the attacks on Paris.

The head of Kenya’s police, Joseph Boinnet, echoed those comments on Twitter and called for the public to be alert.

Both Uganda and Kenya have experienced attacks by the Somalia-based militant Islamist group al-Shabab.

In April this year 147 people died when a university campus in the Kenyan town of Garissa was attacked.

That followed the September 2013 attack on the Westgate shopping mall in Kenya’s capital, Nairobi, in which 67 people were killed.

In July 2010, more than 70 people died in Uganda’s capital, Kampala, when a bar and restaurant were bombed as people were watching the World Cup final.

In Nairobi on Sunday there were more police officers outside churches and shopping malls, reports Kenya’s Standard newspaper.

Correspondents say increased concern amongst members of the public is evident.

Uganda’s police spokesman Fred Enanga told journalists on Sunday that police have “heightened [the] level of alertness” and that they are working with the military “to ensure that all Ugandans and visitors are safe”.

Kenyan and Ugandan soldiers are part of an African Union force in Somalia which is helping the government regain territory from al-Shabab.