You are here: Home / Africa / Kenya to clear Al-Shabab fighters from forest near Somalia 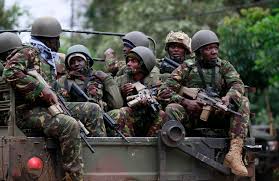 Kenyan security forces have launched an operation to oust al-Shabab militants from the Boni Forest, along the Kenya-Somalia border. Officials say the group has established camps in the forest to attack targets in Kenya.

Kenyan officials say about 300 al-Shabab fighters are hiding in the Boni Forest. The government blames those fighters for deadly attacks in parts of coastal and northeastern Kenya.

The operation is Kenya’s third major offensive against al-Shabab.

In October 2011, Kenyan forces launched an operation to secure its borders after months of cross-border incursions by the Islamist militants. In 2012, Kenyan troops retook the Somali port city of Kismayo from al-Shabab.

Kenya’s interior cabinet secretary, Joseph Ole Nkaissery, was present for the start of the current offensive Saturday. “I have been sent by the president to launch this operation to make sure that there is peace and security in Boni Forest,” he said.

A week earlier, the government ordered those living in the forest to vacate the area. According to Kenyan media, 3,000 people so far have followed the order.

One man who lives in the area, however, said residents feel abandoned.

“The government told us to leave the forest and we [were] not told where to go, now we have left and we don’t know where we are going,” said the Boni resident.

The government has assured the residents they will get the assistance they need.

“The operation, even if it was properly resourced, which it is not, it will be very difficult. The fact is that Boni forest is large,” said Franklin. “It also straddles the border with Somalia, which indicates that either we are going to coordinate the operation with the Somali national army, who are thin on the ground or we are going to cross the border at will.”

Kenya has faced increased terror attacks since it ramped up operations against al-Shabab — most notably the assaults on Westgate Mall in 2013 and Garissa University College in April of this year.

According to government figures, more than 400 people overall have been killed by the al-Qaida-linked militants.

Homeland Security expert Richard Tuta said al-Shabab is finding it easier to operate in Kenya than in Somalia.

The operation to clear Boni Forest is planned to take about three months, but security experts say it could take longer.