You are here: Home / Africa / Kenya to begin border operation to flush out Al Shabaab 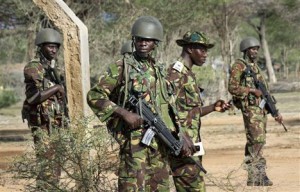 The Government is planning to carry out a security operation to flush out Somali-based insurgents, who are reportedly regrouping along the Kenya-Somali border. According to the Government, the Al Shabaab splinter group allied to Islamic State of Iraq and Syria is planning to carry out major terror attacks in the country.
The militants have carried out at least three attacks on vehicles plying the Mandera–Nairobi road during the festive season, killing at least eight people including four police officers. Mandera County commissioner Fredrick Shisia regretted that the militants have renewed terror attacks in the border county, having been contained for the last six months following a major shake-up of top security officials in the north-eastern region. Shisia said the Al Shabaab hotspots earmarked for the operation are Fino, Omar Jillo, Arabia, Lafey and Dabacity.
The areas have been frequent attack zones as they border Somalia.
The security operation will be conducted by a combined team of the military and police officers deployed to the region to track the attackers to their hideouts at the border. On Sunday, two police officers were killed, while two others were injured after the police land cruiser they were travelling in was hit with a rocket-propelled grenade by suspected Al Shabaab gunmen. Mandera Governor Ali Roba said the attacks in the last two weeks could be a precursor to a planned series of major attacks by the militants.
standardmedia.co.ke