You are here: Home / Africa / Kenya tightens security along border with Somalia over Al-Shabaab threats 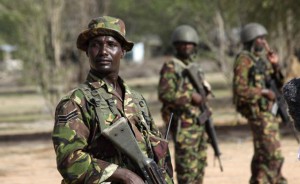 Kenyan authorities say they have enhanced security patrols along the border with Somalia to prevent incursions of Al-Shabaab militants targeting communication infrastructure.

Northeastern Regional Coordinator Mohamud Saleh said on Wednesday that the militants’ bombing of two Safaricom masts in Mandera county early this month was meant to sabotage communication infrastructure and frustrate security operations in the region.

“We have permanent ground security operations on hotspots along the border after we realized that Al-Shabaab were out to sabotage our communication infrastructure,” Saleh told journalists in Garissa.

“They (Al-Shabaab) were also planning to bomb water pipelines in these towns but we managed to secure them,” he said.

Saleh said that the Al-Shabaab Islamist group had been degraded and the few attacks reported for past 14 months, adding that his security team was working closely with the Lower Juba administration in southern Somalia in the fight against Al-Shabaab.

Al-Shabaab militants have been targeting military and police vehicles either by laying ambushs or planting explosives on the road in Kenya’s northeast region, especially in Mandera and Garissa counties.

Kenyan troops are serving with the Africa Union Mission in Somalia to fight against Al-Shabaab militants in support of the Somali government.