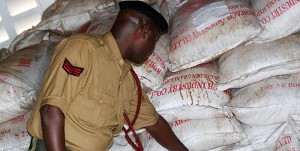 The government revealed that 30 of the 86 al Shabaab financiers and/or supporters whose accounts were frozen by the government are sugar smuggler barons.

According to the government, the smuggling of sugar from Somalia into Kenya finances terrorism.

A confidential government report seen by the Star says: “Most of the smuggled sugar enters the country from areas controlled by al Shabaab in Somalia. The sugar barons pay illegal levies (or protection fees) to al Shabaab, who in turn uses the proceeds to fund terrorist activities/operations. Many others are being pursued and will soon face the full force of the law as the country’s security agencies zero in on them in a concerted effort to rid the country of the al Shabaab menace.”

The government has also released the names of the barons whose accounts have been frozen. They include Abdullahi Mohammed, alias Abdullahi Mrefu, who, Intelligence sources say, is the head of sugar smugglers inside the IFO Refugee Camp.

Another is identified as Abass Ibrahim, alias Abass Kidogo, deputy to Abdullahi Mrefu.

Yet another al Shabaab financier is identified as Abdalla Godana, who owns a go-down in Bondeni, Mombasa, where it is alleged that smuggled sugar from the United Arab Emirates through the Kismayu-Hulugho-Ijara-Lamu entry points is repackaged in Mumias Sugar Company bags and sold as local sugar.

Eastleigh businessman Abdi Gedi Amin too has been named as an al Shabaab booster and transporter of smuggled sugar alongside Abdalla Godana and Mohammed Hassan Duale.

The manager of Shibale Market-based HY Transporters, Ali Bashir Hassan Adan, is alleged to be the one who transports sugar smuggled by Abdalla Godana, Mohammed Hassan Duale and Abdi Amin into the Kenyan market.

Ali Gedi Ali is a smuggler and resident of Hodhan location, Wajir East subcounty, as is Mohamed Yarrow Adan Mohamed.

Another sugar smuggler identified by Intelligence is Abdullahi Mohamed Holale, a resident of Wagberi location, Wajir East subcounty, as the supplier to all businessmen in the sector within the county.

Another al Shabaab sympathiser and financier is identified as Abdi Mohamed Dahiye, the proprietor of Al Hamda Wholesale. He also owns a petrol station and smuggles petroleum products and sugar from Somalia.