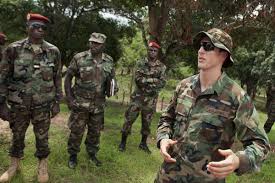 Last week’s killing of 148 people at a university has piled pressure on President Uhuru Kenyatta to stop frequent gun and grenade assaults staged on Kenyan soil by the al Shabaab group, which is aligned to al Qaeda.

Mohamed said Kenya, a staunch Western ally in the fight against radical Islam in east Africa, already receives intelligence support but was seeking additional help in the area of intelligence, surveillance, and reconnaissance (ISR).

“Now we are looking at what else we may need and one of the areas is improved ISR, improved capacity, improved intelligence gathering, equipment,” she said in an interview.

Last Thursday al Shabaab gunmen stormed the Garissa University College campus, about 200 km (120 miles) from the Somali border. They initially shot indiscriminately but later hunted down and killed Christian students, while sparing Muslims. The Somali group has now killed more than 400 people in Kenya since Kenyatta came to power in April 2013.

“We are carrying out a gap analysis to see where we need additional support,” Mohamed said at her Nairobi office, close to where al Qaeda bombed the U.S. embassy in 1998, killing more than 200 people in the most lethal attack in Kenyan history.

In 2013, the United States sent FBI investigators to help Kenyans with investigations into an al Shabaab raid on Nairobi’s Westgate shopping mall, in which 67 people were killed during a four siege.

Kenya has struggled to stem the flow of al Shabaab fighters and weapons across its 700 km (440 mile) border with Somalia, and the recent bloodshed has damaged the economy by scaring away tourists and investors.

Mohamed said Kenya was looking at ways it can put up more border posts and improve surveillance along the frontier, an area where foreign allies may be able to help.

Kenya has responded to the Garissa attack by bombing two al Shabaab camps in Somalia, while Kenyatta asked the Muslim community on Saturday to help root out radicalization at home, saying the planners and financiers of the attack are “deeply embedded” in Kenya’s society.

One of the four gunmen in the Garissa raid was an ethnic Somali whose father is a Kenyan government official, intensifying fears about the threat from home-grown militants.

Mohamed said Kenya plans to compile a list of radicalized young men in the next few weeks to determine the scale of the problem within its Muslim community, who make up about 10 percent of Kenya’s 44 million people.

“We’re waiting to see how big the numbers are,” Mohamed said, adding that many are suspected of having joined al Shabaab by illegally crossing into Somalia, where the group is fighting African Union soldiers, including Kenyan troops. “The idea is for us as a government is to try and account for those people and…help them to get de-radicalized.”

The Garissa assault has strained historically cordial relations between Kenya’s Christian and Muslim communities, which have deteriorated in recent years following Islamist attacks on churches and Christian priests.

Mohamed said Muslim leaders have heeded Kenyatta’s call for the community to do more to combat radicalization and had put forward proposals to do that, including the vetting of Islamic teachers and how to deal with Muslim institutions.