You are here: Home / Africa / Kenya-registered plane, that was carrying material for Amisom, crashed in southern Somalia 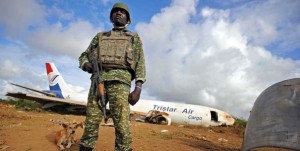 An aircraft chartered by the African Union Mission in Somalia (Amisom) crashed Wednesday in a rural area in Afgoye district, south of Mogadishu.

Mr Abdulkadir Mohamed Nur Sidee, the governor of Lower Shabelle region, confirmed the incident, adding that heavy rains coupled with winds may have caused the crash.

Sources stated the Kenyan-registered plane was carrying material for Amisom. Its destination was said to be Balidogle airport, a former military airstrip, 110 km south of the Somali capital.

It had earlier departed from Nairobi, Kenya.

“We know that the aircraft crashed at a rural area called Osman-durre,” said Governor Sidee.

Some reports indicated that militants loyal to the jihadist group Al-Shabaab who control the rural zone overrun the crash area, covering the plane with branches and leaves to hide it.

There was as yet no information on casualties. However, unconfirmed reports say that the militants had seized 12 crew members and taken them away from the crash site.

The nationality of the crew and their whereabouts is not known.

“We sent the Somali National Army forces and Amisom troops to the area to secure the plane,” Governor Sidee said.

The Somali government has issued no other statement..

On October 12, an Egypt-owned plane ferrying supplies for Amisom crashed between Mogadishu and Afgoye town. But since the crash area was controlled by the federal government of Somalia, the crew were safely removed and brought to Mogadishu.