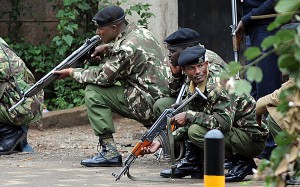 Kenya plans to launch a military offensive against Islamist militants who have set up bases in a remote forest at the northern tip of its Indian Ocean coastline bordering Somalia, a police official said on Monday.

The east African country says Somalia’s al Shabaab group has carried out attacks along its northern coast before retreating to hideouts in Boni forest, a 160 kilometre-reserve that is also a sanctuary for elephants.

“We want to ensure the forest is safe and that no criminals are using it as a hideout to plan evil against our people,” Frederick Ndambuki, commissioner of Kenya’s Lamu county, told Reuters.

Al Shabaab, which has lost territory inside Somalia following offensives by African Union troops, has claimed responsibility for a spate of attacks in the area, saying it was meant to pressure Nairobi to pull its contingent in the mission out of Somalia.

Police and military officials say the insurgents have permanent bases deep in Boni forest, where they live with their families and hunt game for food while using water from rivers flowing through the reserve.

Last week, Kenya’s inspector general of police Joseph Boinett declared the forest a dangerous area, meaning security forces can use that as legal backing to carry out operations. Officials said columns of troops were already assembling there.

Al Shabaab was behind the assault on Nairobi’s Westgate shopping mall in 2013, in which 67 people were killed. They were also carried out attacks that killed about 100 people in Lamu county last year.

Kenya has beefed up security in Lamu county and Lamu town, a popular tourist destination where visitor numbers have dwindled over the past year. Local businesses say a dusk-to-dawn curfew has further hurt their struggling trade.

The United States often issues a warning to its citizens from travelling in the region.