You are here: Home / Africa / Kenya launches airstrikes against Islamic militants in Somalia 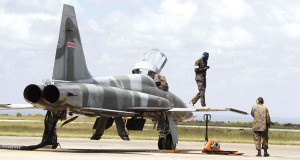 Al-Shabab, which is based in Somalia, claimed responsibility for the college attack Thursday in the Kenyan town of Garissa. Four gunmen died in the assault.

The airstrikes occurred in the Gedo region of Somalia, Obonyo said.

“This is part of continuing operations, not just in response to Garissa,” he said.

Kenyan President Uhuru Kenyatta had vowed harsh measures against al-Shabab following the slaughter at Garissa, which is near the border with Somalia. Kenya has troops in Somalia as part of an African Union force to attack al-Shabab and shore up the beleaguered Somali government. Kenya has carried out air strikes before.

Al-Shabab said it attacked students at Garissa College University as a reprisal for Kenya sending troops into Somalia.