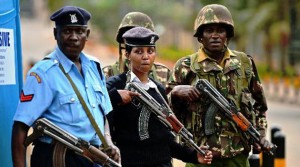 Islamic State supporters carried out an attack on Kenya’s port city of Mombasa in which three robed women tricked their way into a police station, stabbed an officer and set fire to the building, the group’s Amaq news agency said on Tuesday.

Militant attacks, mostly claimed by al-Shabaab militants from neighbouring Somalia, have increased in recent years in Kenya, which has a large Muslim population concentrated mostly along its Indian Ocean coast.

But police said in May they had arrested militants linked to Islamic State, a group which has seized areas of Iraq and Syria and inspired offshoot groups in the Middle East and Africa.

“The perpetrators of the attack on the Kenyan police in the city of Mombasa were supporters of Islamic State. They executed the operation in response to calls to target crusader states,” the agency affiliated to Islamic State reported.

Sunday’s attack in Mombasa appeared to be the first claimed by the group on Kenyan soil. In the Mombasa assault, the three women were shot dead. Police said they recovered an unexplored suicide vest from one of the attackers.

When suspected Islamic State militants were detained in May, experts said Kenya’s focus on dismantling al Shabaab cells may have allowed sympathisers of Islamic State to slip under the radar.

But they said it was not clear whether such sympathisers had formal links to Islamic State in Syria or Iraq, or were simply offering allegiance.

Al Shabaab has said it targets Kenya, a majority Christian nation, for sending its troops into Somalia as part of an African force to battle the Islamist insurgents. It often says it will continue attacks until the Kenyan “crusaders” leave.