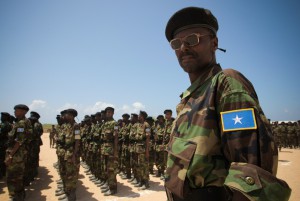 Kenya is ignoring intelligence information about al Shabaab, a senior Somali National Army commander has said, according to TheStar.

Speaking to the Star near Bulla Hawa town, near Mandera, along the Kenya-Somalia border, Hassan said attempts by his forces to collaborate with Kenya have repeatedly failed.

“Kenya is not serious in the fight against al Shabaab,” claimed a visibly angry Hassan.

“Some weeks ago, we gave names of individuals we knew to have links with terror networks in Somalia and who were in Mandera county. They were 14, including two whites. But Kenyan officials did not do anything about it,” he said.

Asked why the Somali forces did not deal with them, he said the suspects enter and leave through routes manned by Kenyan forces.

“The security forces know those routes. They cannot deny it. The individuals and their collaborators know that we know them. They avoid us,” he claimed.

He said the KDF knew the location of the al Shabaab stronghold.

“There is a town called Gadandawe, some tens of kilometres from here [Bulla Hawa]. Kenya knows the town is a safe haven for al Shabaab. They never made an attempt to flush them out,” he alleged.

He said al Shabaab members have “easy access” in and out of Mandera.

He dismissed KDF’s claims that it bombed al Shabaab in the Lower Juba region as “inconsequential”.

“KDF many times just bombed livestock herders and killed hundreds of animals. They actually know where al Shabaab adherents are and their movements,” he said.

The Somali commander claimed that the route of the proposed Kenya security wall lies within Somali territory.

“Kenya has taken advantage of the many years of Somalia’s lawlessness and encroached on our land. More than two kilometres of Somalia is now illegally inhabited by Kenyans,” he said.

Mandera county commissioner Alex ole Nkoyo denied any land grab and said “These claims that are not good for the relationship of the two countries and security forces.”

He acknowledged the existence of local terror networks but said “I am not aware of any government official who colludes with al Shabaab to commit terror.”

“Of course there are locals who are working at the behest of criminals, including al Shabaab. This made the fight against terror very difficult,” he said.

“Terrorism has taken a tribal and political dimension,” he added.

“About the issue of encroaching on Somali lands, there are beacons that were erected during the colonial times. From Border Point One in Mandera all the way to Kiunga in Lamu, they are clearly demarcated. Such sticking points will be dealt with by the relevant authorities, such as surveyors,” he concluded.