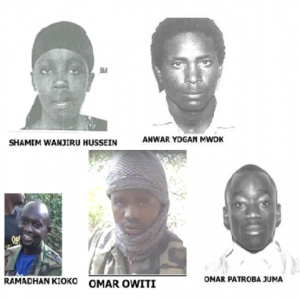 Kenya’s Ministry of Interior and National Co-ordination has released names and images of five most wanted terrorists believed to be members of the Islamic militia group, Al- Shabaab, which is based in neighbouring Somalia.

According to intelligence, the four men and one woman who are suspected to be planning an attack in Kenya, are Anwar Yogan Mwok , Omar Owiti, Shamim Wanjiru Hussein, Omar Patroba Juma and Ramadhan Kioko.

Shamim Wanjiru Hussein is said to be the wife of Omar Patroba Juma, a person believed to be a member of the al-Shabaab militia who escaped after a foiled attack in Baure, Lamu County, near the border with Somalia.

Omar Owiti and Ramadhan Kioko are also said to be among the attackers. Owiti reportedly joined the group in 2013 while Kioko joined in 2008.

Anwar Yogan Mwok, a former Mathare United football player, is believed by authorities to be a member of Jaysh Amman which recruits Kenyan fighters for the al-Shabaab.

Meanwhile, police are conducting forensic examinations to determine the identity of an al-Shabaab operative killed during the rescue operation of abducted teacher Judy Mutua in Garissa.

Northeastern Region Co-ordinator Ambassador Mohamud Saleh said they are also investigating if the man was involved in any recent al-Shabaab activity in the country.

Saleh said intelligence suggests that the refugee camps in the northeastern region of Kenya are quickly becoming havens for organized crime such as terrorism, drug trafficking, human and arms trafficking.