You are here: Home / Africa / Kenya, eyes on the commanders as soldiers continue to die in Somalia 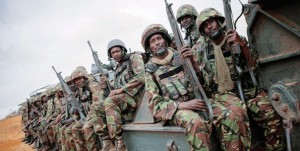 Top commanders of the Kenya Defence Forces (KDF) are facing increasing public scrutiny following a second deadly attack on their troops in Somalia, like reported by nation.co.ke .

Security and diplomatic experts are also questioning the African Union Mission in Somalia (Amisom) and Kenya’s role in it.

Kenya had two key objectives when its troops crossed into Somalia in October 2011 — protect the homeland from Al-Shabaab attacks and help Somalis to form a strong government in Mogadishu so it could stand on its own against the militants.

Since then, there has been varying levels of success in meeting these strategic objectives with more Kenyan soldiers and civilians killed in the period after the incursion.

The biggest civilian casualties were suffered during the Westgate attack in Nairobi in 2013 and the Garissa University College attack in 2015.

But in the past one year, it is Kenyan soldiers in Somalia who have suffered some of the heaviest battlefield losses with more than 200 thought to have been killed or wounded — even though KDF has not made public the official figures.

On January 27, Kenya lost more soldiers when the militants attacked their camp at Kulbiyow, southern Somalia, using the same tactics that saw more than 100 soldiers killed in El-Adde in January last year.

Somalia still grumbles about the fact that it lost the Shifta war in the 1960s and the northeastern region to Kenya at independence.

“In addition, the Mogadishu government sees Kenya’s activities in Jubaland, where Kenya has taken political sides, as inimical to its interests. This has weakened Kenya’s leverage in Somalia without improving security back home,” he says.

Mr Maina thinks Kenya can still secure its interests without its boots on the ground in Somalia.

“Unfortunately, the government sees discussion of possible exit from Somalia as a sign of weakness.

“That makes it impossible to do a strategic review of our role in Somalia. Kenya’s presence in Somalia seems to inflame everyone, the Somali people, who should be our allies, and Al-Shabaab, whose attack on Kenya was the justification for our invasion in 2011,” he says.

Mr Maina says the government needs to rethink the Somali mission, not as a prelude to bolting from there but as a way to work out why the country is not safer from attacks than it was before the KDF incursion.

Until that is done, every battlefield loss will increase the spotlight on the leadership of the military with claims of inadequacies in the mission.

Among those on the spot are Major- General Adan Mulata, the Assistant Chief of Defence Forces – Operations, Training and Doctrine, who is in charge of the planning of the war in Somalia.

Almost the entire KDF ground boots in Somalia are drawn from the Kenya Army.

Other important decision makers in Nairobi include Brigadier Daniel Kimutai Pyaban, who is the Rapid Deployment Capability Commander, who, in such an attack, is responsible for drafting a quick response unit to rush to the besieged camp.

Much higher above these officers are the top ranks of the military.

The soldiers in Kolbiyow are under KDF’s Eastern Command under Major- General Benjamin Biwott.

The increasing losses could dent morale among the rank-and-file.

Military sources, who spoke in confidence, also claim there have been concerns on various aspects of the mission.

These include the soldiers’ rotation policy. KDF rotates its soldiers between November and January.

This predictability means the militants time their attacks around the same routine catching new soldiers off guard.

The attack also led to questions whether the KDF commanders had learned any lessons from El-Adde.

“Was it an issue with strategy, command or execution?” wonders security commentator Joseph Gachie.

Traditionally, the military holds senior officers accountable for all actions, success or failure, within their commands.

But there has been no evidence that any action had been taken for the losses in Somalia.

In El-Adde, the Officers Commanding were killed in action.

At Kulbiyow Camp, the most senior officer was reportedly severely wounded while two others were killed.

While sharing with colleagues how they survived the siege, a soldier recalled: “After the explosion of the third VBIED, our defence was rendered hopeless. Al-Shabaab militants were running all over. We started running for our dear life.”

In the most recent incident where Al-Shabaab seemed to have been aided by intelligence, questions have been raised on whether the militants had infiltrated the operations of KDF and its Somali National Army allies.

The engagement in Somalia is divided into four sectors manned by different commanders.

The Kolbiyow camp fell under the Sector 2 whose Commanding Officer is Brigadier William Shume.

“A wave of terrorists supported by two Vehicle Borne Improvised Explosive Devices attempted to attack the camp but the attempt was unsuccessful due to the fire from KDF troops in defensive positions,” a statement signed by KDF Spokesperson Lt Col Paul Njuguna said.

However, video footage released by Al-Shabaab on Monday appears to show the militants inside the perimeter wall of the camp.