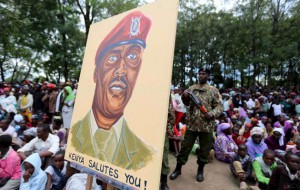 Kenya has given the United Nations three months to remove a camp housing more than half a million Somali refugees, as part of a get-tough response to the killing of 148 people by Somali gunmen at a Kenyan university, wrote TimesLive.

Kenya has in the past accused Islamist militants of hiding out in Dadaab camp which it now wants the U.N. refugee agency UNHCR to move across the border to inside Somalia.

“We have asked the UNHCR to relocate the refugees in three months, failure to which we shall relocate them ourselves,” Deputy President William Ruto said in a statement.

“The way America changed after 9/11 is the way Kenya will change after Garissa,” he said, referring to the university that was attacked on April 2.

Dadaab hosts more than 600,000 thousand Somali refugees, according to Ruto, in a remote, dry corner in northeast Kenya.

Ruto said Kenya had started building a 700-km (440-mile) wall along the entire length of the border with Somalia to keep out members of the Somali Islamist militant group al Shabaab.

“We must secure this country at whatever cost, even if we lose business with Somalia, so be it,” he said.

On Tuesday, Kenya closed 13 informal money remittance firms, hawalas, to cut off funding to suspected radicals. Ruto said any business that collaborated with al Shabaab would be shut down.

Al Shabaab has killed more than 400 people on Kenyan soil in the last two years, including 67 during a siege at Nairobi’s Westgate mall in 2013, damaging tourism and inward investment.

On Monday, the Kenyan air force launched air strikes against al Shabaab targets in Somalia, a country where it has been militarily engaged against the Islamists for several years.