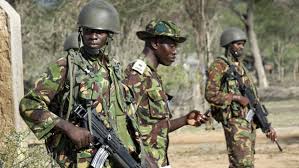 Kenya Defence Forces (KDF) troops struck and killed 15 suspected al-Shabaab terrorists in Yantooy, Jubba River in operation to capture Jilib town in Somalia.
KDF spokesman Col David Obonyo said the troops struck Sunday morning and killed the 15 before recovering two boats that they were using to cross the river. Obonyo said the terrorists were trying to cross Jubba River when they were attacked. “The two boats they have been using to cross river Juba were also destroyed. There was no casualty on the KDF side,” said Obonyo. He added Yantooy is strategically situated across river Jubba and has been the main base the terrorist use to cross the river from Jilib and infiltrate into lower Jubba.
The attack, he added is part of the ongoing Operations ‘Jubba Corridor’ and these are shaping operations to prepare for the capture of Jilib the remaining Al Shabaab headquarters in lower Shabelle. The troops who are under the Africa Union Mission in Somalia (Amisom) have captured several towns that were under the terror group as part of efforts to liberate the country.
In the process, dozens of suspected militants have been killed and injured. More than a dozen troops have also been killed in the operations.
KDF went to Somalia in October 2011. Kenya’s incursion into southern Somalia started after the kidnapping of two Spanish women, who were working for MSF at the Dadaab refugee camp. The abductions were carried out by the militants who the troops said planned to push away under the Operation Linda Nchi.
Two years later, the troops managed to take control of Kismayo port under Operation Sledge Hammer. Initially a team of about 2000 troops had been engaged in the operation but the number doubled when Kenya joined UN’s AMISOM. The Kenyan military says there is no set exit date for the operation, but the indicator of the mission’s success would be a crippling of Al-Shabaab’s capacity.
The militants have struck Kenya more than four times demanding the withdrawal of the troops.
standardmedia.co.ke