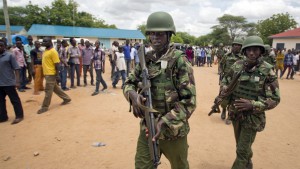 The Kenyan police arrested 4 members of the Somali Islamist group Al Shabab, who were operating from a refugee camp in Dadaab, Garissa, reported an official source.

Mohamud Saleh, security coordinator in the region, located just 100 kilometers from the border with Somalia, said that during the operation the police seized materials used to manufacture explosive devices and also weapons and communication systems.

Saleh indicated that the Kenyan authorities are carrying out a strong offensive against Al Shabab, which has increased its presence in that country.

On September 11 Kenya launched an operation called ‘Linda Boni’ to destroy the Somali camps in Garissa, one of the most affected by militant violence in recent months.

As part of the measures to strengthen the fight against Al Shabab, the government recently relieved of their posts several chiefs of security, including the police chief of the capital, Nairobi, and also of Mandera, Wajir and Garissa.

Al Shabab increased its actions in Kenyan territory since 2011, when that nation destined troops to support operations of the African Union Mission to Somalia (AMISOM) against the terrorist group.

According to police sources, since 2012 about 500 people died in Kenya due to actions of Islamic extremists.