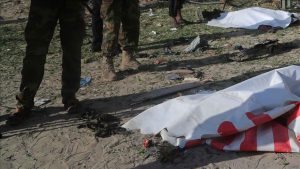 At least 15 al Shabaab militants were killed after their vehicle ran over an IED they had earlier planted at Sarira area between Kiunga and Ishakani in Lamu East close to the Kenya-Somalia border.

The incident happened at around 9 am.

KDF spokesperson Colonel Esther Wanjiku on Monday said the IED had been planted on the road by a different al Shabaab group before the latter group unknowingly ran over it.

The IED attack targeted security vehicles operating in the areas under the Linda Boni security operation.

All the militants were burnt beyond recognition when the vehicle exploded.

“Fifteen al Shabaab militants died. They were in two groups. One of the groups planted the IED only for the other group to pass through the same point,” Col Wanjiku said.

“They were unaware. Their vehicle ran over it and exploded. All the 15 who were in the vehicle died.”

She termed the incident as a plus for the security agencies and asked residents not to be worried as they are determined to ensure peace and tranquillity in the areas.

“An enemy has died and that’s a plus for us and the efforts we are making here,” Col Wanjiku said.

She said massive patrols had been launched in the general area of the incident to flush out any militants who could still be hiding there.

The multi-agency security operation was launched by the national government in September 2015 at the height of al Shabaab attacks to flush out the militants believed to be hiding inside the Boni Forest.

The KDF spokesperson lauded the amicable relationship between residents and security agencies saying it had played a key role in the successes recorded by the security operation.

In June 2019, three al Shabaab militants died after an IED they were trying to plant on the road exploded along the Bodhei-Bargoni road in Lamu East subcounty.

A fourth terrorist who had been severely injured in the incident died shortly as he tried to flee the scene.