You are here: Home / Africa / Kenya: 6 military officers killed in spate of attacks 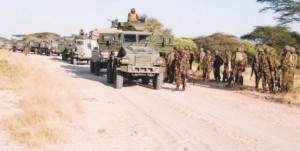 Six security personnel have been killed in the past two weeks in attacks across the country. A Kenya Defence Forces soldier was killed in an ambush in El-Wak in Mandera County on December 13. The rest are police officers who were killed in separate ambushes, most of them by Al Shabaab militia. At least five other officers are admitted to various hospitals following the attacks that happened during the Christmas period. The first victim was an officer who was among two people killed when the militants attacked a bus in Kutulo.
The officer was in civilian clothes and was travelling in the Makka bus.
The second incident happened on Christmas Day when an Administration Police officer was killed in an ambush in Budhei near Kiunga in Lamu County. The terrorists also burnt down a vehicle that the officer and his colleagues were using. Another attempt on a General Service Unit vehicle near Witu in Lamu County failed after an improvised explosive device (IED) thrown there missed it on the same day. On December 26, an AP officer was also killed in Kibera slums and robbed of his gun that had 30 bullets and a communication gadget. The officer was on patrol with his colleagues when they were ambushed by gunmen within the slum. His bosses said he was shot at close range as his colleagues took cover during the 4am incident. Nairobi police boss Japheth Koome said they are yet to recover the weapon and gadget and make arrests over the incident.
On Sunday, two police officers including an OCS were killed in an attack on a police vehicle near Lafey in Mandera County. Two others are in hospital with serious injuries. The gang used a rocket-propelled grenade to attack the vehicle, setting it on fire. They escaped soon after the incident but two officers were unhurt. Earlier on Saturday, two of the terrorists had been killed after an IED they were planting on the road targeting police vehicles went off by accident. Three others escaped on foot. Security agencies have been mobilised in the area after increased attacks by the splinter group of the terror gang. The group is allied to the Islamic State (ISIS), officials say. Police say they have averted many such planned attacks and urged for citizen co-operation to tame the situation. Interior Cabinet Secretary Joseph Nkaissery said tactics used by the group were signs of desperation and pressure from both Kenya and the African Union Mission in Somalia.
standardmedia.co.ke