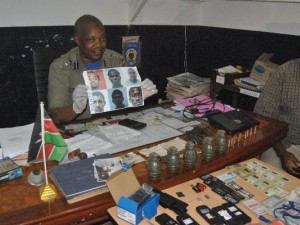 Four of seven most wanted terror suspects in Malindi were killed in a shootout with police near the airport on Wednesday morning.

Among them were Issah Ali from Kisauni in Mombasa and Suleiman Awadh, on whom police had placed a Sh2 million bounty.

Malindi OCPD Matawa Muchangi said police went to the suspects’ hideout after receiving a tip-off from members of the public.

Muchangi said they knocked the door but that the suspects responded by hurling grenades, an indication they may have been aware of the police pursuit.

“We had no choice but to open fire on the suspects,” he said, adding no police officer was injured in the 2am incident.

Muchangi said a Koran, ten newspapers with headlines on the al Shabaab terror group, five grenades and cartridges were found.

A pistol, nine bullets, sim cards and ID cards were also seized, he said, adding there was also a map of targets for attacks in the constituency.

“They had another map that had indicated the route they would take from Malindi to Boni Forest,” he said.

The police boss said officers also found a letter the suspects had written to a person funding their activities in the region.

“The letter was to a person named AG. In it, the suspects requested more money saying they were out of cash,” he said.

He said the suspects also requested ‘AG’ to provide them with clothes they could use to conceal their identities.

Muchangi said three suspects escaped with injuries and took an AK 47 rifle with them.

He thanked the public for assisting authorities and said investigations were launched.