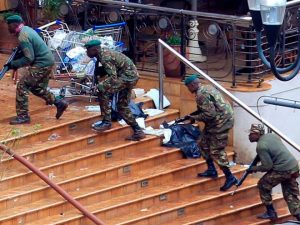 Sources told Morning Star News that two Christian teachers and the wife of one of them were killed after being targeted by suspected terrorists from the Somali rebel group who broke into the staff sleeping quarters at the Qarsa Primary School in Somali Wajir, some 100 miles from the Somali border.

But after killing Seth Oluoch Odada, his wife Caroline and another teacher, Kevin Shari, one of the assailants reportedly said in the Somali language, ‘These infidels [non-Muslims] should be wiped out,’ a teacher who survived the attack told a worker at Wajir Referral Hospital, with the worker recounting this to Morning Star News.

The pastor of a local church, un-named for security reasons, told Morning Star News that Odada and his wife attended his church. It was not known if Shari belonged to a church.

The pastor said: ‘We are very concerned about this selective kind of attack on non-locals who are also Christians in this region. Our other church members are not safe. Many of the church members, including teachers, have started fleeing the area to their home villages, and some did not attend the church for the Sunday service.’

The victims’ bodies have been transferred to Chiromo Mortuary in Nairobi.

The hospital worker said that after shooting the couple, one of the assailants entered the house Shari shared with the surviving teacher and shot at Shari, with the same bullet striking the hand of the survivor, who fell down and pretended to be dead. The injured man reportedly said that the shooter wore a mask typical of Al Shabaab militants.

The area pastor said that there is a belief in the area that local people have joined Al Shabaab.

‘I think these are the people who killed the three Christians,’ he said.

According to Morning Star News, Wajir is becoming increasingly dangerous for Christians since Al Shabaab militants appear to have shifted from Mandera, where they carried out attacks in the past few years before the government recently erected a 10-kilometre wall on its border.

Fear has gripped Christians in Wajir, the pastor said.

Meanwhile, in Garissa, about 200 miles south of Wajir and also near the Somali border, Al Shabaab has also been active, with the pastors’ fellowship in Garissa reporting that several members did not appear for Sunday services.

‘We as the pastors fellowship do register our concern to the government to protect Christians living in this volatile north-eastern country,’ the chairman of the fellowship said.

Rebels from Al Shabaab, which is linked to Al Qaeda, have launched several attacks in north-east Kenya since Kenyan forces led an African coalition into Somalia against the rebels in October 2011 in response to terrorist attacks on tourists and others on Kenya’s coast, Morning Star News reported.

Kenya is ranked 32nd on the Open Doors’ 2018 World Watch List of the 50 countries where it is most difficult to be a Christian.