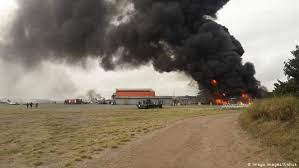 Islamic insurgents in Kenya have killed three people in Garissa county, near the country’s border with Somalia.

The militants also damaged a telecommunications mast and a police station in the attack Monday.

The Associated Press reported al-Shabab militants were responsible for the attack.

Al-Shabab has launched several attacks inside Kenya, including assaults on schools and shopping malls.