You are here: Home / Africa / Keeping Islamic State out of Ghana 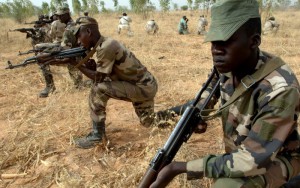 Ghana is ‘surrounded’ by other West African countries where the Islamic State group has a presence: Nigeria, Niger, and Chad. Following the news of the recruitment of Ghanaian youths by the Islamic State, what used to be a distant threat is now knocking at the door.

Islamic State’s principal aim is to establish a state ruled by a single political and religious leader according to Islamic law. Foreigners seem to be the target of IS propaganda and messaging. For instance, ISIS celebrated the 2014 Eid al-Fitr with a special greeting to the Muslim world. These messages are usually released in many languages, including in English, French, and German, and other languages.

Prior to the news of Twenty-five year old Nazir Alema Nortey and Rafiq travelling to join the Islamic State, Ghana had a reputation of being one of the very few stable and established democracies in Africa. Whereas employment has been relatively low in Ghana, there is potential for increased unemployment given that macro-economic growth has dropped below the average of at least 8% since 2013 and currently stands at 3.9 per cent.

While youths from both rich and the poor backgrounds are known to have been recruited by IS, ‘the recruits’ are purportedly promised luxurious lives when they get to Syria and Iraq, as well as assurance of quality life for their immediate family members back at home. This is an offer Ghanaian young men and young women are finding difficult to refuse, especially youths from the majority: northern Ghanaian Muslims.

Boko Haram in the Picture

In accepting Boko Haram’s pledge of allegiance, an Islamic State spokesperson, Abu Mohammed al-Adnani, stated on Thursday, March 12th that the objective of creating a caliphate has been extended to West Africa, urging Muslims to join militants in the region.

The Islamic State’s recruits from Ghana are believed to have journeyed to Nigeria to receive training at a Boko Haram training camp in Niger before traveling to Turkey or Syria.

Three Ghanaian students are believed to have travelled to join IS. Ghana’s National Security Coordinator stated that students at various Ghanaian universities had been targeted by the Islamic State. What is disturbing, however, is that the statement allegedly made by the National Security Coordinator that not many Ghanaians have travelled to join the Islamic State therefore “there was no need to be petrified.”

Northeast Nigeria, Niger, and Chad may continue to facilitate massive recruitment of Ghanaian youths for IS, serving as training grounds and travel routes.

Ghana, like many other Africa countries, does not have anti-terrorism processes. Fears about IS threats are now running high in Ghana, with the possibility of radicalized youths returning home someday.

It will be in the interest of Ghana’s national security to work with its West African neighbours on how to fashion and develop effective anti-terrorism processes, as well as curtailing IS’ recruitment of African youths, beginning with President Buhari’s official visit to Accra on Monday, September 7th.