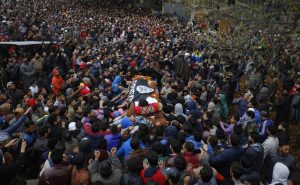 On Sunday, 19 November 2017, downtown Srinagar – the traditional hub of Kashmir’s Azadi movement – witnessed the first massive funeral procession of a militant since 1990 without the green-coloured flags. There were no trademark slogans of “Jeevay Jeevay Pakistan” either, save some slogans for Azadi, but no Pakistani national flags that had dominated Kashmir after Burhan Wani’s death from Uri to Kishtwar, like reported by thequint.com.

The slain militant Mugees Ahmad Mir’s coffin was draped in a black Al-Qaeda/ISIS flag and the carriage bedecked with the black banners of the two ultra-radical jihadist outfits.

In early 1990s, there was a fierce competition of grabbing the spaces between the pioneers Jammu and Kashmir Liberation Front (JKLF), which had green, red and white colours on its flag, and the formidable Hizbul Mujahideen.

The red being associated with the National Conference (NC) and the two Communist parties – traditional rivals of Hizbul Mujahideen’s political arm, Jamaat-e-Islami – was a symbol of heresay for all pro-Pakistan guerrilla outfits. In the first four years, JKLF was nearly extinct in a chain of internecine clashes. It was relieved of its guns and grenades, but its flag survived.

Hizb and other pro-Pakistan groups were equally allergic to the blue introduced by the then separatist leader and People’s Conference founder Abdul Gani Lones for the stars on his party flag. Lone’s assassination on 21 May 2002, at a huge gathering on Eidgah Ground in Srinagar, did not add to any pro-Pakistan group’s influence, as the Assembly elections that year split the Hurriyat and relegated all separatist ideologies to the margin for six years.

Return of the Green

However, when Mufti Mohammad Sayeed’s publicly waged war against the power partner Ghulam Nabi Azad government’s decision of allotment of a piece of land to Amarnath Shrine Board lent a fresh lease of life to separatism in 2008, the green dominated the Valley.

The change of colours proved to be short-lived. In the weeks of his much-hyped release from over five-year-long detention by Chief Minister Mufti Sayeed, hardliner Massarat Aalam Bhat revived the hibernated enthusiasm in April 2015 while leading pro-Pakistan slogans and hundreds of his supporters waving Pakistani national flags on the Srinagar airport road in front of the J&K Police headquarters. With the Mufti government’s permission, Aalam organised a huge reception for hardliner Syed Ali Shah Geelani.

The Hizbul Mujahideen poster boy Burhan Wani’s death in an encounter on 8 July 2016, virtually turned Kashmir into Pakistan. For the next 15 months, there was only one colour on flags, banners and buntings – green.

The first harbinger of the change of colour came on 7 April 2017, when a group of five masked gunmen appeared in Kareemabad village of Pulwama to pay salutes to their departed colleague Naseer Ahmad Pandit on his first death anniversary.

An armed guard at residence of the PDP leader and Education Minister Altaf Bukhari in Srinagar, Pandit had deserted Police to join Hizbul Mujahideen and had died in an encounter, along with the commander Waseem Ahmad Malla, in an encounter in Shopian.

Before their appearance, in August 2015, Burhan Wani in a video message had spoken of his commitment to establish “Khilafat” (caliphate) in Kashmir but had never asked the Kashmiris to “replace the green Pakistani flag with the green Islamic flag.”

In a significant development on 12 May 2017, Burhan Wani’s successor and Hizbul Mujahideen’s top commander Zakir Musa, issued a video calling the separatist leaders “saboteurs” and threatening them of “beheading in Lalchowk” if they continued “to harm the struggle for Islam.”

The first indication of Zakir’s influence came on 26 May 2017, when, before dying along with two more local militants in an encounter at Saimoh village of Tral, Sabzar Bhat called a militant on the phone. In the conversation he is heard seeking apologies and writhing in pain on having “broken Musa’s heart” (by agreeing to lead the organisation).

According to well-placed sources in the Jammu and Kashmir Police and security forces, the militant leadership in Pakistan was much perturbed when Zakir roped in Lashkar-e-Taiba’s senior most commander Abu Dujana along with a number of cadres. It was around this time that the decision of assigning the key command to Jaish-e-Mohammad was taken in Pakistan and over 20 battle-hardened jihadists (all in the age group of 22-32 years unlike LeT’s 16-22 years) were pushed in from Poonch-Rajouri and Samba-Kathua border of Jammu.

Following this “change of leadership strategy,” Zakir has not been able to expand his cadre as the Police and security forces killed 190 militants – most of them on LoC but over 60 in South Kashmir alone – including those loyal to him.

“Zakir’s strength is limited but his popularity, more precisely the popularity of his ideology of caliphate, is growing remarkably,” said a senior Police officer referring to the Valley’s all-dominating slogan “Musa Musa Zakir Musa.”

The third significant development this year occurred when on 27 July, The Guardianin London reported that Al-Qaeda had launched its Kashmir branch under the title Ansar Ghazwatul Hind (AGH) and appointed Zakir Musa as its head. It caused ripples across the globe.

In a prompt reaction, the United Jihad Council (UJC) in Pakistan headed by Hizb chief Salahuddin dismissed these outfits as “terrorists” while claiming that they had no role or presence in Kashmir.

Interestingly, this was in sharp contrast to his address to a rally in Muzaffarabad on 14 July 2014, when he welcomed and invited Al-Qaeda and ISIS to Kashmir.

Terrorism and the freedom movement are poles apart. Our movement is local in nature and indigenous in character.
It asserted that international terror outfits like ISIS and al-Qaeda were “non-existent” in Kashmir and that there was “no role for these groups within our movement”.

The ISIS Denial in J&K

Months before Mugees Ahmad Mir’s funeral, body of the Hizbul Mujahideen militant Sajjad Ahmad Gilkar was also draped in Al-Qaeda/ISIS flag at Malaratta on 13 July 2017, but it was not a massive procession. And there were also a couple of Pakistani flags.

One would find hard to dispute opinions, editorials and statements claiming that Al-Qaeda and ISIS in Kashmir was “just a myth and propaganda to defame the local, indigenous freedom struggle”.

In the past, the only indication of a Kashmiri youth’s association with ISIS was a report which claimed that Adil Fayaz Wada, MBA from Queensland University in Australia had joined this global terrorist outfit in Turkey in August 2015. Earlier in 2017, two more Kashmiri youths – Afshan Parvez and Mohammad Talha – were deported from Turkey on charges of their links to ISIS.

Relatives of Mugees Mir admitted after the funeral that he was deeply influenced by ISIS ideology and it was his will to drape his body in ISIS flag.

A teacher in the Department of Sociology at University of Kashmir said, “A 5,000-strong funeral procession with only ISIS flags and no Azadi or Pakistani flags makes a big statement. This is an early indication of the transformation and perhaps a submission and surrender.”

According to him Al-Qaeda and ISIS are “an ideology” that cannot be measured in terms of infrastructure and the number of their cadres. “It’s primarily the responsibility of clergymen, civil society and politicians to contest such ideologies. But they have abdicated for different reasons”, he added, asserting that police and military had little role at this stage.

“They seem to be groping in the dark,” he said over the officers’ assertion that they were “looking into it” how ISIS had claimed responsibility for the encounter in which Mugees and a Sub Inspector got killed at Zakoora on 18 November.

Professor of Political Science at University of Kashmir, Gul Mohammad Wani, told The Quint that the ultra-radical ideology of ISIS and Al-Qaeda was growing in Kashmir in reaction to the “Hindutva agenda” of BJP.

Professor Wani pointed out how the entire Muslim belt of Rajouri had appeared to be pro-ISIS when VHP and Bajrang Dal activists torched an ISIS flag with Kalima Tayyiba written on it on 21 July 2015.