You are here: Home / West Asia / Kashmir ‘s Sopore town is living in fear with ISIS like terror group emergence 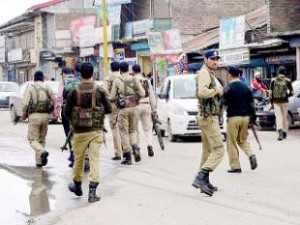 The north Kashmir town of Sopore and its fringes, famous for apple orchards, is once again witnessing a reign of fear; only, this time, the portents are grimmer. New terror groups have arrived that sound chillingly like ISIS, with their daily posters of what’s permissible and what’s not. From a dress code to use of mobile phones, these ISIS clones issue dire warnings to all, with non-Kashmiri labourers told in clear, cold terms to leave the state.

In their latest decree, the terror groups have warned of attacks on petrol pumps, cable operators and alcohol shops. The posters, which appeared on June 6 under the banner of Tehreek-eTaliban (TeT), asked pump owners not to refuel vehicles of Indian military and police personnel.

TeT has also ordered locals not to rent their premises to “outsiders” and, even more bizarrely , warned tailors not to take measurements of women who want clothes stitched. This followed a diktat prohibiting women from wearing body-hugging clothes. The posters further warned cable operators against telecasting Indian shows, and ordered liquor shops to shut down immediately.
Sopore cable operators travelled to Srinagar on Monday to inform hardline separatist Syed Ali Shah Geelani about the TeT warnings. A Sopore doctor, who didn’t want to be named, said, “The situation is turning bad. Militants are seen roaming around the town with automatic rifles. Things are going to get worse,” he presaged, saying well-off business families were talking about leaving Sopore for safer places.
Migrant workers from Bihar and Uttar Pradesh are exiting in droves, creating another set of problems for locals who depend on their skills, from carpentry to farming. As a result, people are refusing to say or do anything that would earn the wrath of terror mongers. It’s almost as if the clock has been rewound to 1990, the Valley’s worst year of terror.

This week began with the cable network shut, and no public use of cell phones after a girl was attacked in the main market by two scooter-borne men who also snatching her phone. On Tuesday, gunmen shot and killed health department employee Altaf Rehman Sheikh, 45. “He was working as an overground worker for the militants, and his father is a staunch Jamat-e-Islami activist who had returned from Pakistan in 2004,” an intelligence officer told TOI.

Atop administrative official said Sopore and its periphery have become a safe haven for terrorists owing allegiance to Hizbul Mujahideen and Lashkar-e-Taiba. Security agencies have categorized Sopore as highly “terrorist infested”.