You are here: Home / MidEastGulf / Kabul: More than 1,000 Afghan fighters killed in Syria 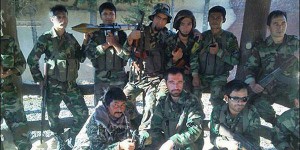 More than 1,000 Afghan combatants, who have been fighting in support of Syrian President Bashar Al-Assad and are affiliated to the so-called Iranian Islamic Revolutionary Guard Corps (IRCG), were killed in Syria, Afghan officials said.

The National Radio Television of Afghanistan (RTA) reported yesterday that the number of Afghan martyrs, who were sent from Iran to fight alongside Assad’s army, has passed 1,000.

The report added that Iran had promised Afghans that they would be granted a residence permit and about $500 monthly salary in return for fighting in Syria. Iran later denied using “any kind of allurement or coercion”.

The semi-official news agency Tasnim reported in May that Iran passed a law allowing the government to grant citizenship to families of foreigners slain while fighting for the Islamic republic. This could also apply to volunteers from Afghanistan and Pakistan who are fighting in Syria and Iraq against Daesh.

The law is likely an attempt to encourage Afghans to take on more risky missions and attract recruits.

Iran has been recruiting hundreds of Afghan and Pakistani Shias who are affiliated to the Revolutionary Guards with the aim of sending them to fight in support to the Syrian army.