You are here: Home / MidEastGulf / Jordan to erect barrier on Iraq-Syria border to stop IS 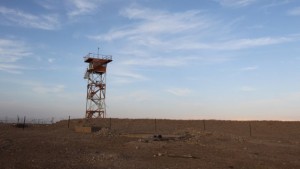 Jordan is digging trenches and raising dirt barriers on its northern and eastern borders with war-ravaged Iraq and Syria to stop fighters from nearby jihadist groups infiltrating into its territory, a top Jordanian general said Tuesday.

The measure is part of Amman’s multi-pronged approach to combating the ruthless terror group, which seized a downed Jordanian fighter pilot and burned him to death in a cage in January. At the time, King Abdullah II pledged to step up the fight against IS, which released a gruesome video of the killing that shocked Jordanians.

Abdullah said Jordan’s response “will be harsh because this terrorist organization is not only fighting us, but also fighting Islam and its pure values.” Soon after the king made his remarks, Jordanian warplanes launched dozens of strikes against Islamic State positions.