You are here: Home / MidEastGulf / Jordan reinforces its troops on the border with Syria and Iraq 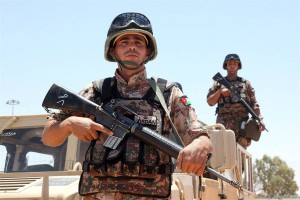 Sources in Jordan reported that it has begun the deployment of military reinforcements to the northern border with Syria and eastern border with Iraq, according to Sky News Arabic station.

The Jordanian news agency Ammon said that this military reinforcement aim at raising defense readiness to repel any possible attack or penetrate the border of Jordan process.

Jordan has recently foiled a plot by an Iraqi –  Norwegian person belongs to the Iranian organization, wanted to carry out terrorist attacks on the Jordanian arena, using a large amount of high explosive material.

This comes as the US House of Representatives approved Tuesday a text facilitates the sale of arms to Jordan in a confined privilege to rare allies of Washington.

US House of Representatives adopted a bill quickly through an oral vote, to be voted on by the Senate later.

The Chairman of the Committee on Foreign Affairs , Ed Royce said that “Jordan is in the front lines in the battle against ISIS, and the refugee crisis in Syria, as millions of people were displaced.”

Republican Rep. Ileana Ros-Lehtinen said “we send a message that we stand in solidarity with our allies, and we will do whatever necessary to overcome terrorism and radical extremism.”

The text adds Jordan for three years, to the list of countries that benefit from the simplified mechanism for signing contracts for the export of US arms, now it includes NATO, Israel, Japan, Australia, New Zealand and South Korea.

Washington had announced in February its intention to increase US assistance to Jordan annually from 600 million to one billion dollars, between 2015 and 2017