You are here: Home / MidEastGulf / Jordan mobilizes troops on the Iraqi border 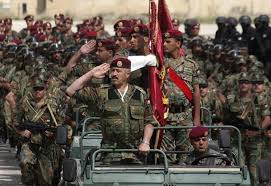 Jordanian armed forces has doubled over the past three days , precautionary procedures on the eastern border with Iraq, after the arrival of information about the possibility of the outbreak of a violent military actions between the Iraqi army forces and fighters belonging to the Islamic State organization .

Jordan has taken new actions under follow-up of field data in Anbar province in coordination with the Iraqi army that included defensive armor-border offensive forces , units of the border , radar devices and monitoring guards.

Alquds Alarabi newspaper quoted informed sources that this defensive precautions are taken in anticipation of the possibilities for fled of ISIS fighters to the Jordanian side in the event of the success of a military plan seen by Amman requires Besieging them in the vicinity of Al-Anbar, specifically in the two entrances in Ramadi city

According to the newspaper, military experts imagine that ISIS fighters who will move with their vehicles and with their weapons toward the nearby desert region of Jordan.

The newspaper says it has information about the Jordanian defense plan for the kingdom’s borders, which include reserves from possible attacks with car or truck bombs in the event of breaches along the Jordanian border that are subjected to close military surveillance this time, not security only.