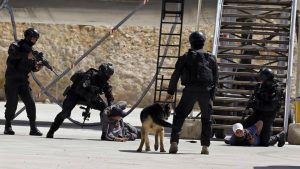 Two Jordanians were sentenced Wednesday to 10 years in jail with hard labor for planning attacks on the Amman embassies of Russia, Iran and Israel, like reported by toi.com.

Jordan’s state security court convicted the two men for having manufactured explosives and plotting attacks on behalf of “a terrorist group.”

In the charge sheet seen by AFP, the two were accused of belonging to the Islamic State group and of planning to carry out bomb attacks in 2016 on the Russian, Iranian and Israeli embassies in Amman.

A suicide bombing in June of that year claimed by IS near a border post with war-torn Syria killed seven Jordanian soldiers.

Israel’s embassy in Amman has been shuttered since a deadly scuffle there in July.

The announcement came after Israel and Jordan reached an agreement to end a diplomatic standoff over the July 23, 2017, shooting deaths of two Jordanian men by an Israeli embassy security guard. Israel says the guard opened fire in self-defense after being attacked by one of the men.

Israel’s outgoing ambassador to Jordan, Einat Schlein, hurriedly left Amman late on July 23 along with the rest of the embassy staff, leaving the mission empty.