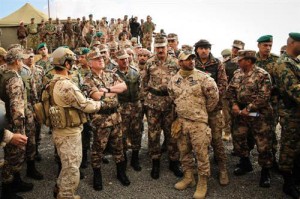 Jordan and Italy, on Wednesday, inked a deal to cement military cooperation between the two countries in areas of training, armament manufacturing and exchange of expertise among others.

The agreement was signed by Chairman of the Joint Chief of Staff, the King’s Adviser for Military Affairs, Gen. Mashal al-Zabin, and Italy’s Defense Minister, Roberta Pinotti.

Al-Zabin hailed Jordanian-Italian ties and thanked the Italian government for its supportive stances to Jordan.