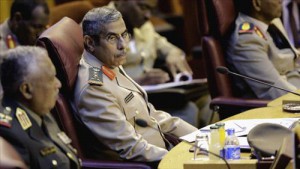 Army chiefs of staff of Arab countries have drafted a protocol for a new joint force to intervene in Middle East hotspots on missions ranging from fighting militants to Iran-backed groups — despite lingering disagreements on some details, including where to base the force’s headquarters.
The plan, drafted at a gathering Sunday in Cairo, describes where and how the force would be put into action. Membership is “voluntary,” the draft says, and if only three of the members sign up, it’s enough to put the plan into action. A decision to intervene would be based on a request from a member state “facing threats.”
The idea of an Arab joint force has already been tested in the ongoing Saudi-led coalition’s airstrikes against Shiite rebels in Yemen. But observers say that in cases like Libya, consensus on a military intervention would be difficult since different Arab countries support rival parties in the North African nation.
Defense ministers of member states would run the force, with two-thirds of votes required to pass decisions. Military plans on engagements would be up to the member states’ military chiefs.
However, there was dissension over the force being headquartered in Cairo, the home of the Arab League. Qatar and Algeria objected to the location, said officials who attended the gathering.
US Defense Secretary Ash Carter endorsed the Arab joint force plan and State Department officials said that the United States was waiting to see the exact structure and operational mandate of the joint force.