You are here: Home / MidEastGulf / Jinan tells details of her suffering in ISIS slavery market … required and desired specifications 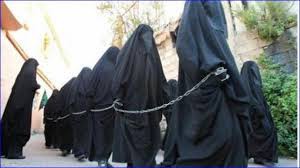 Jinan tells her suffering after ISIS organization was able to control the Yezidis areas in Iraq, in a forthcoming book to be released by “Fayar” house for publication.

After more than a year after the tragedy suffered by Yazidis in Iraq, by ISIS organization, the book is expected to be issued in France and holds the title of ” slavery in ISIS “, deals with the story of a young Yazidi lived through the hell of the organization.

The book, which will be published by “Fayar” house for publication, tells the suffering of a young Yazidi , Jinan , eighteen-year-old, who talked about her suffering that accompanied many others after being held in ISIS elements .

This young woman, who lives today after fleeing from the grip of the organization in a refugee camp in Iraq, tells her bitter stories with these girls in the extremist organization markets, also reveal how she moved during her detention for three months in Iraq at the end of 2014 in detention camps of the organization before she was able to escape under cover of darkness.

According to Jinan, having traveled in several places of detention, including a prison in Mosul, a former policeman and imam of a mosque purchased, her and put her with other Yazidi girls in one of the houses, saying “that they were torturing them and forcing us to convert to Islam “, when we rejected ” we were exposed to beaten and force us to stay in the sun, drinking contaminated water by dead rats, they were threatening us to be tortured by electricity. “

“These men are not human beings, they do not think only of death and using drugs permanently, they want to take revenge on everyone and assert that the Islamic state must control the whole world.”

Jinan, who has traveled in the last period to Paris, accompanied by her husband, whom she met again after fleeing, before returning to the Yazidis refugee camp in Kurdistan, where she lives today, says, “in Mosul, we were moved to a big hall has a lot of columns with dozens of other women , The fighters were going through telling stupid joking without depriving themselves of caresses, one of them was expressing his “dismay” because my breast are big, “and I want a Yezidi with blue eyes and white face, they are the best, if you find one of them , I’m ready to pay the price.”

Jinan adds, ” a person went to one of ISIS elements, saying, Give me your gun and I will give this Brunette, but if you want to pay cash give me $ 150, you can also pay in Iraqi dinars.”

The young Yazidi remembers that she saw Iraqis , Syrians , foreigners, and Westerners but was not able to determine their nationalities during her presentation in the slave markets, the beautiful girls were taken to Gulf customers to pay a high price.

In the house, which I had been held, ” visits of customers repeated as fighters used to come to inspect goods. Some traders take Brokerage and there were princes inspect the goods.”

Jinan concludes by saying, “If we go back to our villages , we will fall once again as the victims of massacres. The only solution for us is to get the area to be under international protection.”

ISIS control on the Yezidis areas

It should be noted that ISIS managed to control Mount Sinjar (the area inhabited by the majority of the Yazidi community), in early August of 2014, which led to the deaths and the flight of hundreds of thousands of Yazidis.

The militant group’s control on Mount Sinjar came abruptly after the withdrawal of Peshmerga forces, which had controlled the Yezidis areas, and soon the region has seen an intense wave of displacement towards other regions, especially towards Kurdistan.