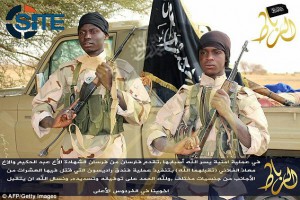 An Islamic terror group has released a photograph of two baby-faced jihadists it claims killed 20 people at the Radisson Blu hotel in Mali.

The picture published by al Mourabitoun shows the young men – dressed in military fatigues and carrying AK-47s – standing in front of a pick-up truck bearing a black flag with Arabic writing.

‘Two knights from the knights of martyrdom… carried out an operation on the Radisson hotel, killing in it dozens of foreigners of various nationalities,’ a caption naming the two men reads.

The photograph was posted by the Al-Ribat Media Foundation, which is al Mourabitoun’s media unit, and was seen by the SITE Intelligence Group, which monitors radical Islamist organisations in the media.

It was not possible to confirm independently whether the men who assaulted the Radisson Blu on November 20 and died during their operation were the ones shown in the photograph.

Mali state television last month showed photographs of the corpses of two men it said were the attackers.

It did not name the two men, but the names given by al Mourabitoun today conformed with the names it used in an earlier message.

The attack reflected a deterioration in security in Mali two years after a French-led military operation to scatter Islamist militants who briefly occupied the desert north.

French troops and a 10,000-strong U.N. peacekeeping force are struggling to stabilise the former French colony, and attacks on both Malian and Western targets have spread further south and far beyond traditional militant strongholds.

Six Russians, three Chinese and citizens of other countries including Mali, Israel, Belgium and the United States died in the attack in the West African state’s capital Bamako.

Al Qaeda in the Islamic Maghreb (AQIM) said last week it has joined forces with al Mourabitoun and together they staged the attack.

In an audio message, AQIM chief Abdelmalek Droukdel, an Algerian, said: ‘The lions of al-Murabitoun brigade… have joined Al-Qaeda in the Islamic Maghreb, so that they are one sword in the throat of their first enemy, Crusader France and its agents in the area.’

Meanwhile, al-Murabitoun, the group led by one-eyed Mokhtar Belmokhtar, confirmed in an audio recording that it is joining AQIM.