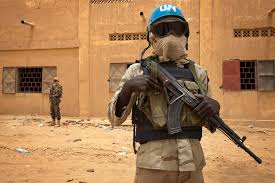 Jihadists killed six people in an attack on an armed Tuareg group in Mali near the fabled northwestern city of Timbuktu, the group and a security source told AFP.

Mali faces double threats from pro-government fighters and former rebels who still sporadically clash despite signing a peace deal in 2015, and from Al-Qaeda-linked groups which reject such accords.

“Six people, among them our fighters and civilians from our community, were killed on Sunday by AQIM (Al-Qaeda in the Islamic Maghreb) between the towns of Goundam and Douekire,” said Azarok Ag Inaborchad, president of the Congress for Justice in Azawad, or CJA in French.

The CJA, created last year, represents the Kel Ansar community of ethnic minority Tuaregs who live in northwest Mali. “We are pro-peace,” Inaborchad said. “It’s the enemies of peace who organised an attack against us.”

The tumult of a 2012 Tuareg-led separatist uprising and the rebellion’s hijacking by jihadists was followed by a peace deal signed two years ago but its implementation has been patchy. A Malian security source confirmed the death toll and told AFP the attackers may have had a specific target in mind.

“They had two objectives: to sabotage the peace process, and search out an important figure in the CJA,” the source said. Mali’s army, a deployment of French soldiers and a UN mission named MINUSMA have little control of large tracts of the country despite almost five years of military operations to root out the jihadists.