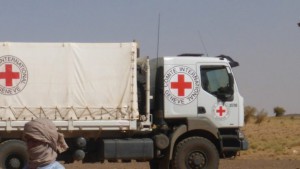 An International Red Cross worker was killed and a local colleague wounded when the aid truck they were driving was attacked by gunmen in northern Mali on Monday, in an attack claimed by the MUJAO jihadist group.

The International Committee of the Red Cross (ICRC) said it was “profoundly dismayed by the death of one of its staff in Mali” after his aid truck was attacked near the northern city of Gao on Monday morning. The nationality of the victim was not immediately released.

A member of the national Mali Red Cross was wounded in the attack and is in a stable condition, the ICRC said.

“The ICRC strongly condemns the attack and calls on all parties to the conflict to respect and protect humanitarian workers,” the organisation said in a statement.

A spokesman for the MUJAO group (the Movement for Oneness and Jihad in West Africa) said the attack had killed “a driver who worked for the enemy”.

“We have achieved what we wanted with this attack,” Abou Walid Sahraoui told AFP by phone.

The ICRC staff member, named only as Hamadoun, was driving a truck from Gao to Niamey in neighbouring Niger “to collect much-needed medical equipment for Gao hospital”, said Yasmine Praz Dessimoz, head of ICRC’s operations for North and West Africa.

ICRC said the exact circumstances of the incident that killed the married father of four remained unclear, but stressed that the truck had been clearly marked with the Red Cross emblem.

An African military source with the United Nations’ MINUSMA mission in Mali said the attack happened between Gao and the town of Ansongo and had been “carefully planned”.

“It was carried out by at least six terrorists. Shots were fired,” the source said.

Divided into rival armed factions, plagued by drug trafficking and infiltrated by jihadist groups, Mali’s desert north has struggled for stability since the West African nation gained independence in 1960.

The ICRC’s Praz Dessimoz said the humanitarian situation in northern Mali was “worrying”.

“The ICRC is concerned about the rise in violence against humanitarian workers, which is preventing them from coming to the aid of individuals and communities in dire need,” she said in the statement.

The MUJAO was one of a number of Islamist militia groups that controlled northern Mali for nearly a year before they were routed and pushed north into the deserts of the Sahara by a French-led offensive in 2013.

Extremist fighters have however continued to stage sporadic attacks in Mali’s north.